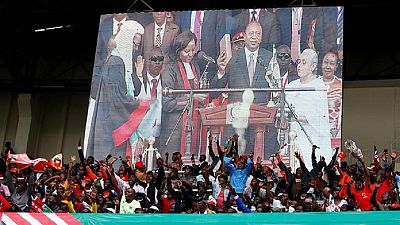 The government of Kenya has reacted angrily to a European Union (EU) report that highlighted the use of state resources and intimidation of electoral officials during last year’s disputed polls.

The Kenyan Embassy in Brussels where the report was presented says the claim by Marietje Schaake, the head of the EU observer mission, that Kenya was not ready to meet her was ‘dishonest’.

While presenting the report of the observer mission at the EU parliament in Brussels on Monday rather than presenting it in Kenya, as is the norm.

‘‘We were entirely prepared to travel to Nairobi this week to present the final report of our recommendations to the government of Kenya as well as to other important stakeholders, of course the most important being the people of Kenya.’‘

The Kenyan government says a visit had been agreed for ‘between mid-February to mid-March’ while the EU mission in her statement said she was releasing the report to meet an EU guideline of presenting a report three months after an election.

‘‘We’ve understood, however, that the Kenyan government is not prepared to receive us within the terms foreseen in the memorandum of understanding signed between the EU and Kenya; because that specifies that we will present our final report within three months of the Election Day,’‘ said the Dutch politician.

The report summarised the observations of the EU team and gave 29 recommendations on how to improve the electoral system.

Among the issues she highlighted were paying of people to attend political rallies, use of State resources during campaigns, politicians intimidating key independent institutions, and a persistent lack of trust on the Independent Electoral and Boundaries Commission (IEBC).

In her observation, it is Kenyans’ resolve to be peaceful that has averted the country from plunging into war.

‘‘The fact that Kenya is not in a war situation can be attributed to the Kenyan people,’‘ she said.

President Uhuru Kenyatta was elected in a repeat election in October which was boycotted by opposition leader Raila Odinga.

The first election in August, which Kenyatta won, was annulled by the Supreme Court.

The election period was marred by violence, with rights groups saying that at least 50 people, mostly opposition supporters, were killed by the police.

The police, however, disputed the allegations.