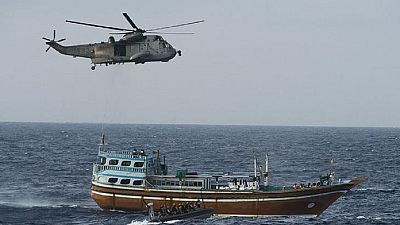 A Tanzania-flagged ship was intercepted carrying 1.6 tonnes of cocaine last week in the Atlantic Ocean.

The unnamed vessel was spotted by a Dutch naval forces helicopter on Christmas Day. It was seized the next day and escorted to Santo Domingo in Dominican Republic by the US Coast Guard.

“Following a thorough inspection, the officials located 1,600 kilos of cocaine hidden between the fuel tanks aboard the ship on December 31,” the World Maritime News website reported.

Following a thorough inspection, the officials located 1,600 kilos of cocaine hidden between the fuel tanks aboard the ship on December 31

Tanzania has in the past been on the spot over vessels from countries targeted by UN sanctions flying its flag, mainly North Korea and Iranian ships. It has also suffered diplomatic embarrassment after vessels it has flagged are used to ferry illicit drugs.

Efforts to get comments regarding the latest vessel seizure from the Tanzania Zanzibar International Register of Shipping (TZIRS) that is responsible for registering foreign ships proved futile.

Officials from the ministry of Foreign Affairs were also not available for comment.

The ship seized last week, its crew and cocaine haul were handed over to the Dominican authorities for further investigation, said the maritime news site.