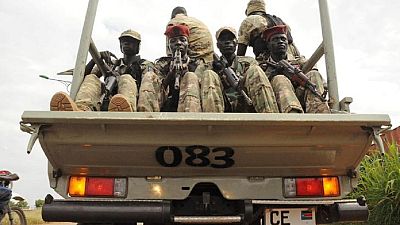 The government of South Sudan has beefed up security in the capital, Juba, following a fresh bout of clashes between government troops and rebels, officials said on Friday.

The latest violation of the ceasefire deal signed last month happened near the capital of the country, Juba.

The deal reached in the Ethiopian capital Addis Ababa between the government of President Salva Kiir and a myriad of opposition groups had aimed to end a four-year-old war in which tens of thousands of people have been killed.

At about 10:30 p.m. last night, bandits under the direct command of Lieutenant Colonel Chan Garang attacked the SPLA’s position at the north of Kapur

But several violations have since taken place, for which all sides have been blamed.

“At about 10:30 p.m. last night, bandits under the direct command of Lieutenant Colonel Chan Garang attacked the SPLA’s position at the north of Kapur,” he told a news conference, referring to a high-ranking officer who defected from the government last year.

Koang did not give details on casualties, but said fighting was going on.

Rebels under former vice president Riek Machar, whose sacking in mid-2013 amid a power struggle triggered the civil war months later, denied any involvement and added soldiers allied with the defected official had acted on their own.

“We have no hand in what happened in Juba last night,” said Lam Paul Gabriel, the group’s deputy spokesperson. “Those soldiers who are friends to him (Garang) decided to say enough is enough. So they did it.”

Sudan Tribune, a Paris based news agency with a focus on the region, however, reports that Colonel Garang acknowledged leading the attack, which he says was done in retaliation of government attacks.

“Yes, we take a responsibility for that attack and the fighting which occurred inside Juba on Thursday night. That demonstrates our ability and capability to fight and take control of Juba. But because we received orders from our commander in chief, we decided to comply but we continued to experience an attack by the government forces with the intention to gain more positions in different parts. You know the government has been on the offensive and so we cannot continue to fold our hands while we are being attacked,” Lual told Sudan Tribune on Friday.

Following the attack, government has beefed up security in the capital, including the use of local languages to identify and search pedestrians, according to Sudan Tribune.

The U.S. embassy in Juba has also imposed a 7 p.m. curfew for unofficial travel, following the violence.

The conflict in the world’s youngest country has been fought largely along ethnic lines, pitting forces loyal to Kiir – an ethnic Dinka – and Machar, who is Nuer. Other factions have also sprung up ever since.

The war has forced a third of South Sudan’s 12 million-strong population to flee their homes.

The ceasefire is intended to revive a 2015 peace deal that collapsed in 2016 after heavy fighting erupted in Juba, with talks on a new power-sharing arrangement and a new date for polls scheduled to follow.

It is also designed to allow humanitarian groups access to civilians caught in the fighting.

Neighbouring countries who brokered that agreement have warned the warring sides that they would back punitive measures if violations persisted.

The United States, Britain and Norway, who form a group that supported a 2005 accord that led to South Sudan’s independence from Sudan, have also threatened to impose individual or group sanctions for those violating the ceasefire.