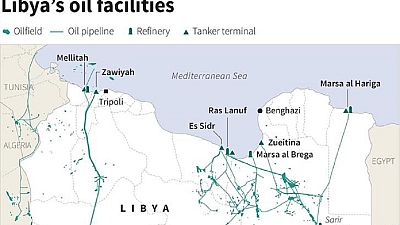 Armed men blew up a pipeline pumping crude oil from Libya’s south to a port terminal in its north, Es Sider port on Tuesday, cutting Libya’s output by up to 100,000 barrels per day (bpd), military and oil sources said.

The state-run National Oil Corporation (NOC) said in statement output had been reduced by 70,000-100,000 bpd. The Corporation couldn’t confirm the cause of the blast.

The attackers reportedly arrived at the site near Marada in two cars and planted explosives on the pipeline, a military source said.

The damage was still being assessed, one oil source said. Oil prices rose on the report.

Islamic State fighters had a presence in the area until government forces expelled them from their main stronghold in Sirte a year ago.

The operator of the pipeline is Waha, a subsidiary of the NOC and a joint venture with Hess Corp, Marathon Oil Corp and ConocoPhillips.

The North African state’s oil production was last put by officials at around one million bpd but exact figures are hard to obtain in a country riven by factional conflict.

Following the blast, the price of U.S. Oil climbed to $60 per barrel, the highest since June 2015. This was partly attributed to voluntary OPEC-led supply cuts.

Libya produces around one million bpd, but production is regularly disrupted by acts of sabotage, as well as protests over wages or politics.