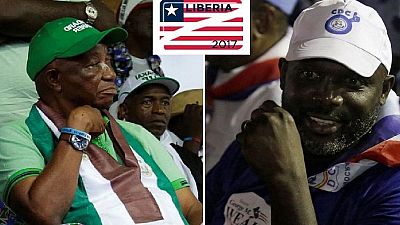 This child of Monrovia shantytown who became a global star of football in the 1990s, George Weah is getting closer to the dream of his second life: to be elected president of Liberia on Tuesday December 26, in a country traumatized by the civil war, which he intends to reconcile.

At 51, the ex-star striker of PSG and AC Milan is again in the final of the presidential election after having very clearly led the first round poll on October 10 in this small English-speaking country in Africa West, one of the poorest in the world.

The former forward genius faces Vice President Joseph Boakai in a run-off poll which was scheduled for November but had to be postponed due to a court action brought by his opponents.

Nobody should be afraid of change, look at my life: I went from footballer to politician.

The only African to have won the Golden Ball in 1995, Weah was largely absent from the country during the civil war that killed some 250,000 people between 1989 and 2003.

Entering politics at the end of the conflict, he was defeated in the second round of the 2005 presidential election by Ellen Johnson Sirleaf, the first woman elected head of state in Africa and then as vice-presidential candidate in 2011.

His party alleged irregularity and fraud but in vain.

This time, while his opponent Joseph Boakai alleged “fraud and irregularities” having according to him tainted the first round poll, George Weah called on his supporters to remain patience and calm.

And he made a show of strength on Saturday by gathering tens of thousands of supporters in the country’s largest stadium in Monrovia.

Fifteen years after hanging up his boots, he claims to have “gained experience” in the political arena and has learnt from his failures.

In December 2014, he was elected a senator, defeating Robert Sirleaf, one of Ellen Johnson. Sirleaf’s sons.

“Nobody should be afraid of change, look at my life: I went from footballer to politician,” he said during the campaign.

“You too can be this person, we are the same,” said the former football star, raised by his grandmother in Gibraltar, a shanty town in Monrovia.

To his critics, who consider his program too vague and point out his absence the Senate, he retorts with his record in health and education, the close relations he has with the people and his promises. “I will make sure our hospitals are equipped, that our doctors and nurses are trained and that they are encouraged to work.”

But George Weah, while affirming that “everyone was the friend of Charles Taylor”, repeats he has no “contact” with the former president, sentenced in 2012 by the International Criminal Court to 50 years in Prison for crimes against humanity and war crimes in neighboring Sierra Leone.

During the civil war, Weah pleaded for peace in Liberia, calling on the Uited Nations to save his country.

In retaliation, rebels burned his house in Monrovia and took hostage two of his cousins.

A member of the Kru ethnic group, one of the most important of Liberia, and not the elite descendant of former American slaves who traditionally dominate politics, George Weah saw his life swing in 1988 the age of 22, thanks to Arsène Wenger.

Then coach of Monaco, the French tactician had unearthed this Tonnerre Yaoundé striker in Cameroon, and brought to the international stage.

For 14 years, this strong striker played for some of the biggest European clubs – Paris Saint Germain and AC Milan, at the height of his career, then Chelsea, Manchester City, Marseille -, amassing a considerable fortune.

But he kept his ties in the suburbs of Monrovia, where he still plays football with friends. Weah’s success story continues in football.

At 17, his youngest son Timothy signed in July his first professional contract with Paris Saint Germain, where his older brother, George Weah Jr, 30, had failed to break through.