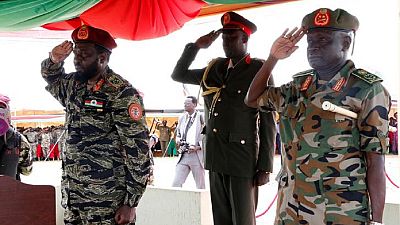 Campaign group Human Rights Watch called the promotions “a slap in the face of justice” – but the presidency said the three men were good officers who had been falsely accused.

In a decree read out on state radio, President Salva Kiir appointed Marial Chanuong as his new head of army operations, training and intelligence, and Santino Deng Wol as the head of ground forces.

The U.N. Security Council imposed travel bans and asset freezes on the three and others in 2015.

It accused Chanuong of commanding troops who “led the slaughter of Nuer civilians in and around (the capital) Juba” in December 2013, including hundreds it said were reportedly buried in mass graves.

The United Nations said Wol commanded troops who killed children, women and old men during a 2015 offensive, while Riak violated a ceasefire in early 2014.

But Human Rights Watch said the announcement, made on the eve of the fourth anniversary of the war’s outbreak, showed the impunity enjoyed by commanders accused of abuses.

The UN High Commissioner for Refugees Filippo Grandi this week called for urgent action against perpetrators of the South Sudan conflict, urging the international community to act quickly.

South Sudan plunged into civil war in December 2013 when a political crisis escalated into fighting between forces loyal to Kiir, an ethnic Dinka, and rebels allied with his former deputy Riek Machar, a Nuer.

The conflict has reopened ethnic fault lines and spread across the country, where more than a dozen armed groups are battling for land, resources, revenge, and power amid widespread reports of rape, murder and torture.

Several ceasefires have been agreed but broken. Tens of thousands have been killed and millions displaced since the war broke out.