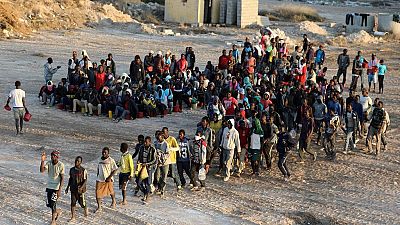 <p>European Union leaders will discuss how to further curb immigration from across the Mediterranean over dinner on Thursday, but are as divided as ever on how to take care of refugees who still make it to Europe.</p> <p>Their chairman, Donald Tusk, proposed creating a new financing tool in the bloc’s next multi-year budget from 2021 to “stem illegal migration”, replacing the ad hoc calls for money that EU states have seen since arrivals peaked in 2015.</p> <p>Despite heavy criticism by human rights groups that it is aggravating the suffering of refugees and migrants on the southern shore of the Mediterranean, the EU is sticking to its policy of providing various kinds of assistance to the governments and U.N. agencies in the Middle East and Africa in order to prevent people making the trek north.</p> <p>While implementing these plans in some places, notably the lawless Libya, is proving difficult, all EU states and institutions in Brussels agree on the approach.</p> <p>However, the question of how to handle refugees who have made it to the EU is as divisive now as it was two years ago.</p> <p>Italy, Greece and other frontline states on the Mediterranean, as well as the rich destination countries such as Germany, want all member states to be obliged to take in a set allocation of asylum-seekers.</p> <p>But several eastern ex-communist EU members reject mandatory quotas, saying accepting Muslim refugees would undermine their sovereignty and security, and the homogeneous makeup of their societies.</p> <p>They want to help instead with money, equipment and personnel for controlling the bloc’s frontiers.</p> <p>The Commission is already suing Poland, Hungary and the Czech Republic for failing to take in their allotment of asylum-seekers from the peak of the EU’s migrant crisis in 2015.</p> <p><span class="caps">DIVISIONS</span></p> <p>Recent proposals for future solutions go in opposite directions, giving little hope of a deal by the target date of June.</p> <p>The bloc’s current chair Estonia suggested sticking to the obligatory scheme when immigration is extremely high, but adding some flexibility by legislating that the receiving and sending states must agree on any relocation.</p> <p>That plan has been quickly dismissed as a non-starter by diplomats from several EU states.</p> <p>The bloc’s executive, the European Commission, proposed that the bloc approve compulsory and automatic relocation for times of mass immigration, but rely on voluntary help in normal circumstances. The European Parliament wants mandatory relocation at all times, regardless of migratory pressures.</p> <p>But now Tusk himself has also come out against quotas, telling EU leaders in a note that they had proven “highly divisive” and “ineffective”.</p> <p>The Commission’s migration chief, Dimitris Avramopoulos, told a news conference on Tuesday that Tusk’s paper was “undermining one of the main pillars of the European project – the principle of solidarity”.</p> <p>For now, immigration figures remain so low compared to the peak of 2015-2016 that the public pressure on EU leaders to come up with a quick fix has eased.</p> <p>That could yet change, however, with Italy’s parliamentary election next spring, coinciding with the start of a new migration season.</p> <p>Germany, currently consumed with trying to form a new government, has long suggested that if no consensus can be reached, an asylum reform could be passed by majority vote – something that would inevitably deepen the divisions and mistrust between member states.</p> <p><strong><em><span class="caps">REUTERS</span></em></strong></p>