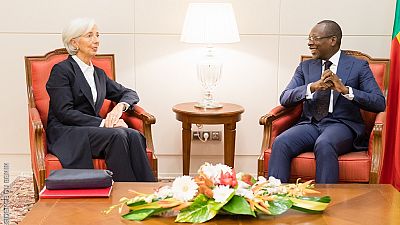 The Managing Director of the International Monetary Fund, Christine Lagarde projected a growth forecast of 6% for Benin during a joint press conference with President Patrice Talon in the economic capital, Cotonou.

“We consider that the performance of the Beninese economy will in 2018 be higher than that of 2017. We have a forecast of 6%,” said Lagarde.

Your government is demonstrating that it can keep its word

In April this year, Benin concluded with the international financial institution an economic and financial program worth $ 150.4 million in support of the “Benin Revealed” program, named after government action program, in place for less than two years.

IMF chief Lagarde described Benin as a ‘ a partner who keeps its promises’, praising the West African country for respecting its commitments to restore finances and accomodate domestic and foreign investment.

“Your government is demonstrating that it can keep its word,” said the executive director of the IMF, citing the government’s efforts in the areas of education, health and “the establishment of good governance”.

The president of Benin used the occasion to defend his government’s liberal economic policies that have been protested by many sectors in recent months.

“We continue to survey the paths of our rebirth.We have in less than 18 months, managed with the Parliament to vote fifty laws of progress”, said President Talon.

Lagarde is on a 3-day state visit of Benin which will see her visit NGOs, women leaders and business leaders with the country’s chamber of commerce before flying to Ethiopia on Wednesday.