Meeting of Egypt and Palestine presidents over Trump's Jerusalem move 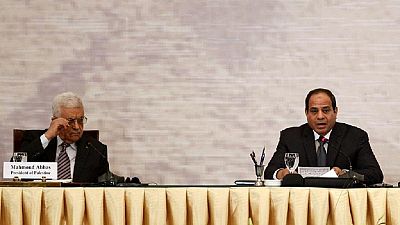 <p>Egypt’s President Abdel Fattah al-Sisi has invited Palestinian President Mahmoud Abbas to Cairo on Monday to discuss U.S. President Donald Trump’s recognition of Jerusalem as Israel’s capital, a presidential statement said on Sunday.</p> <p>The statement said Sisi wanted to discuss “ways to deal with the crisis in a manner that preserves the rights of the Palestinian people and their national sanctities and their legitimate right to establish an independent state with East Jerusalem as its capital”.</p> <p>Last Wednesday, December 6, 2017; Trump officially announced that the U.S. formally recognised the contested city of Jerusalem as Israel’s capital and that plans were afoot for their embassy be moved.</p> <p>World leaders have since slammed Trump’s move calling it a setback for peace efforts between Israel and Palestine and a security risk to the larger Middle East region. </p> <p>The European Union, the United Nations and African Union have all expressed worry over Trump’s move.</p> <p>The move has provoked series of anti-American protests across the Muslim world. Deadly clashes have erupted between Israelis and Palestinians in Gaza. Somalia, Djibouti, Egypt and other African countries have expressed their condemnation.</p>