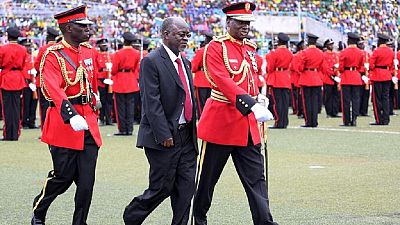 As Tanzania celebrates its 56th independence anniversary, President John Pombe Magufuli continues to stamp his authority and brash stryle of politics on his citizens, allies and opponents.

While addressing the hundreds of people that flocked the Jahmuri stadium for the celebrations, Magufuli announced a pardon of prisoners that would see 1,828 immediately released while 6,329 would have their sentences reduced.

Notable among the beneficiaries is popular musician Nguza Viking a.k.a. Babu Seya and his son Johnson who had been jailed for life after being found guilty of defiling 10 primary school girls in 2004.

Tanzania’s president John Pombe Magufuli made the country’s independence day his own day when he cancelled the 2015 national celebrations in favour of a community clean up campaign and redirected the funds towards an anti-cholera drive that was happening in the country at the time. This announcement came shortly after the president’s inauguration and subsequent cost cutting campaign and war on graft.

He has taken on civil servants, government parastatals, politicians, the media, political opponents and mining mumtinational companies that were thought to be ‘too powerful to question’

As Magufuli continues to impress with his frugality and determination to weed out wastefulness and corruption in government, members of parliament in his ruling Chama Cha Mapinduzi party are considering to table a motion that would extend his term of office by two years.

Some, including former Tanzania president Ali Hassan Mwinyi have suggested that the president should be given a 20 year term to enable him continue installing discipline in the civil service