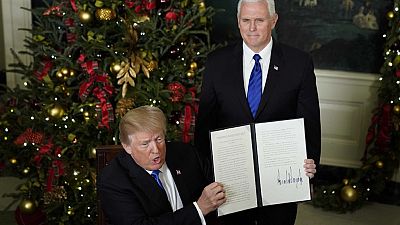 The fallout over Donald Trump’s decision to recognise Jerusalem as the capital of Israel and move the US Embassy from Tel Aviv to Jerusalem, continues. The latest protest action has come from Egypt’s Coptic Church which has rejected a meeting requested by U.S. Vice President Mike Pence during his visit later this month.

The church said they could not host Mike Pence when he visits Egypt because of Trump’s decision, which according to them, came “at an unsuitable time and was made without consideration for the feelings of millions of people”

Downtown Cairo had earlier witnessed hundreds of protesters who demonstrated against the decision, joining European and Arab leaders that have criticised and rejected Trump’s decision.

In Tunisia, thousands of protesters had also demonstrated against the decision, burning US and Israeli flags. The Tunisian president Beji Caid Essebsi reportedly sent a letter to Palestinian President Mahmoud Abbas condemning the U.S. decision, saying it undermined Palestinian rights.

Jerusalem itself witnessed the deadliest protests characterised by arrests, injuries and even death as Palestinian protesters clashed with Israeli police.

Jerusalem city is home to the holy places of three major religions including Islam, Christianity and Judaism. Israel and Palestine have both laid claim to the historic city for a long time, with neither claim earning the stamp of international approval.