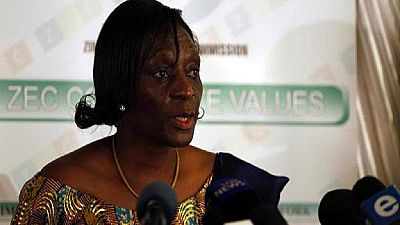 Makarau, seen as an ally of 93-year-old former president Robert Mugabe, gave no reason for her resignation, the official told Reuters.

The Supreme Court judge was widely ridiculed this year after a picture of her kneeling before Robert Mugabe at State House during the launch of biometric voter registration went viral on social media.

Makarau, at the time of her resignation was overseeing an overhaul of the voter’s roll, which the opposition Movement for Democratic Change has described as ‘shambolic’.

President Emmerson Mnangagwa, who was sworn in two weeks ago in the wake of the de facto military coup that ended Mugabe’s 37-year rule, pledged to hold elections as scheduled next year.

Opposition parties have demanded reforms to an electoral system they say is skewed in the ruling ZANU-PF party’s favour.

In a survey done by Afrobarometer early this year, only one in four Zimbabweans say they trust the Zimbabwe Electoral Commission (ZEC). The ZEC is appointed by the presient and is often accused of incompetence and bias.