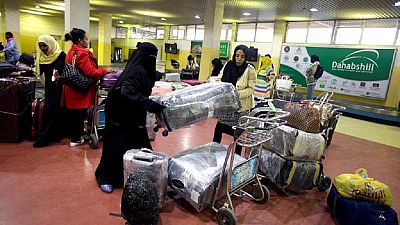 Over 1,300 Ethiopian nationals have been expelled from Saudi Arabia after an quit notice and subsequent amnesty window expired. Saudi had earlier this year warned of a crackdown on persons illegally staying in the country.

The large chunk of those deported – Ethiopians and other nationalities – are classified by the Gulf State as undocumented migrants living and illegally working in the country. The crackdown is said to have started earlier this week.

The issue of Ethiopian migrants has been at the fore of the Saudi eviction threat. Addis Ababa has entered series of agreements with Riyadh to facilitate return of nationals. The government secured exit visas for thousands but maintained that many more remained adamant to returning.

Saudi had said beside forced repatriation, it was also going to prosecute a number of the recalcitrant persons. Most Ethiopian women travel to the Gulf State to work as house helps in order to support families back home.

The Ethiopian government had gone as far as pay part of the air ticket for persons who were willing to return. It is believed that there are about 400,000 such persons out of which about 150,000 returned voluntarily.

Below is a brief timeline of events since March 2017.

– Saudi Arabia issues a 90-day notice for all undocumented workers to quit the Kingdom.

– Ethiopian Prime Minister Hailemariam Desalegn expressed worry over the refusal of nationals illegally resident in Saudi Arabia to return home despite a 90-day amnesty program. Desalegn said he feared that the Saudi government will resort to forcibly deport Ethiopians.

– The Ethiopian government said it had secured exit visas for about 40,000 undocumented citizens living in the Kingdom of Saudi Arabia. The Foreign Affairs chief traveled to Saudi and held talks with officials in Riyadh.

– Information Minister reported that 35,000 nationals had returned home on the program and that 85,000 of them had been granted exit visas at the time.

– The Ethiopian government requested for an extension of the amnesty of the over 400,000 nationals expected back home, the Ministry of Foreign Affairs said only 45,000 had returned home by June 2017.

– The extension requested by Ethiopia was granted by Saudi authorities – a further 30-days.

Ethiopian Ambassador to the UK, Hailemichael Aberra confirmed the extension to the BBC on saying “Ethiopia is trying its best to welcome the people from Saudi Arabia”.

– Amnesty expires but extended for another 30 days upon request by Ethiopia.