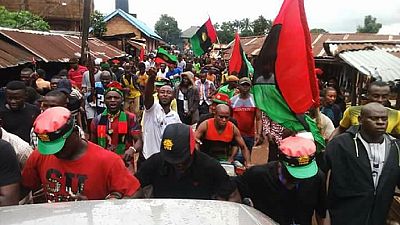 <p>Low turnout greets Anambra state gubernatorial elections. The Indigenous People of Biafra, <span class="caps">IPOB</span>, attributes low turn out to boycott order and they thanked the electorates for supposedly heeding their call.</p> <p>Emma Powerful, the spokesperson of the group in a statement attributing the development to their directive saying :</p> <p>“IPOB wants to use this opportunity to congratulate Biafrans particularly the people of Anambra State for obeying the order of <span class="caps">IPOB</span> and our leader Mazi Nnamdi who has been abducted since 14th September 2017 in today’s election.</p> <p>“The people of Anambra State have shown the whole world that they are the first sons of Biafraland and no doubt about that, there is no election in Anambra State, everywhere is empty both the polling booths and streets are totally deserted.</p> <p>“We want to tell the whole world that <span class="caps">IPOB</span> under the leadership of Mazi Nnamdi Kanu gave the order on Anambra State governorship election to prove to the civilised nations that we are no more interested in the system of government and her political strategies. The international community and other civilised nations should come for rescue of Biafrans in the Nigerian Islamic government,” Powerful said.</p> <p>The Nigerian government has labeled the group a terror organisation. Last week, members of <span class="caps">IPOB</span> were reported protesting in Onitsha, dissuading residents from partaking in the election.</p> <p>While some attribute the large voter apathy across the state during the election to the <span class="caps">IPOB</span> boycott order and militarisation of the state, others say it is because there was no enough flow of cash by the contesting parties.</p>