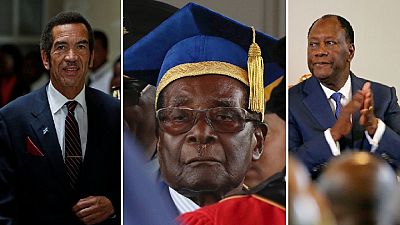 Two African leaders have waded into the political crisis in Zimbabwe, calling on long-serving Robert Gabriel Mugabe to step aside. The two leaders are Botswana’s Ian Khama and Ivory Coast’s Alassane Ouattara.

Ouattara is a ‘newcomer’ making such a call unlike his Botswana counterpart Khama who had openly voiced that view since last year. The AFP news agency quoted the Ivorian leader as saying the world had changed and due to age and the duration Mugabe has been in power, “everyone is aware that it is time for him to handover his seat to a new generation.”

He, however, reserved praise for Mugabe, 93, who has been in power for the past 37 years. Starting off as Prime Minister of the southern African country after independence in 1980 before becoming president seven years later.

I don't think anyone should be president for that amount of time. We are presidents not monarchs. It's just common sense.

Khama is no newcomer in the area of calls for Mugabe to leave power. In an interview with Reuters, he said the military move on Mugabe was an opportunity to rest the path Zimbabwe was heading. “I don’t think anyone should be president for that amount of time. We are presidents not monarchs. It’s just common sense.”

In September 2016 he broke ‘diplomatic rules’ openly asking Mugabe to step down. “Without doubt. He should have done it years ago. They have got plenty of people there who have got good leadership qualities who could take over.

“It is obvious that at his age and the state Zimbabwe is in, he’s not really able to provide the leadership that could get it out of its predicament,” Khama added.