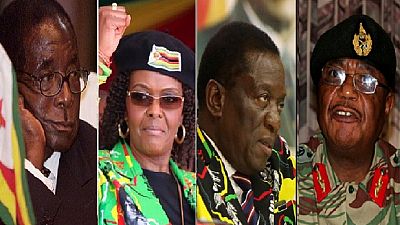 Embattled president of Zimbabwe is the subject of major news headlines around the world. Events back home in what looks like an end to his nearly four decades continue to be covered widely.

The 93-year-old leader is also not doing too bad on social media platforms – Twitter and Facebook. Most users across the world continue to poke fun at him over his predicament. Cartoonists have also waded in to some extent.

What then is Mugabe’s headache? The Zimbabwean Defense Forces (ZDF) made good a pledge to ‘step in’ if Mugabe did not halt a purge of members belonging to his former vice-president Emmerson Mnangagwa.

Zanu PF, the ruling party, had slammed army chief Constantino Chiwenga for a tresonable stance on Tuesday only to wake up on Wednesday with Chiwenga backed army in charge of the state broadcaster and the country’s first and only president ‘confined but fine,’ as Jacob Zuma confirmed.

Below are a series of tweets poking fun at Mugabe

Mugabe fell in love with Grace

Mugabe risked it all for Grace

#Mugabe must be freed at once. Someone democratically elected with 102% of the vote deserves better than this. #Zimbabwe

After you are done with Mr. Mugabe, please come for Mr. Wenger

A MAN LOST A WHOLE COUNTRY COZ OF A WOMAN .. #Zimbabwe

Robert Mugabe is like 100 years old… you can successfully overthrow him by hiding his glasses or tucking him in too tight. #Zimbabwe

Presidents Kenneth Kaunda, Sam Nujoma must be brought to Zimbabwe to speak to Mugabe. At the moment everyone is too junior age wise. Long wait. Logging off

For the past 17 years South Africa has been declaring that there is no crisis in Zimbabwe.

Now that the dictator has fallen, Zuma is now telling the nation to calm down.

Now when Mugabe was 41 years, his wife grace was 1 week old…
???
Maybe… You’re still single because your father-in-law and your mother-in-law have not met yet ???

Kenyans are more glued to the happenings in #Zimbabwe than Supreme Court.

Hint 1: Who wants to listen to something so plain even a kid knows the outcome.

Meanwhile,
Uganda has 3 Presidents( The fake one, People’s and Ghetto)

what is a Koo? #Zimbabwe pic.twitter.com/GRBCiqyg9t

Quite a number took shots at First Lady Grace Mugabe, reputed as the source of the current crisis

Grace Mugabe took the shortest time to bag a Ph.D in the world (2 months). She was given a Doctorate in Sociology by University of Zimbabwe Chancellor, Robert Mugabe only two months after registering for the course at the university.

Grace Mugabe has a PHD …. but her thesis has never been found! #Zimbabwe