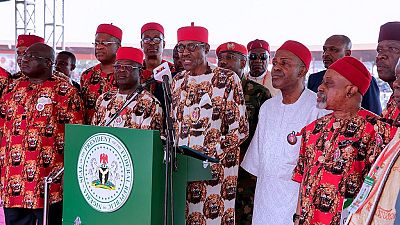 Nigerian president Muhammadu Buhari had tough words for Biafra separatists in the country’s southeast during his presidential tour which took him to Anambra State on Wednesday.

According to him, talk of secession led by the Ingidenous People of Biafra (IPOB) amounted to ‘senseless proaganda,’ and that the impact of the Igbo people on Nigeria can never be underrated.

“There is no part of Nigeria where you will not find Igbo entrepreneurs. So I am asking you all not to buy into the senseless propaganda on secession. Igbo is Nigeria and Nigeria is Igbo. Both are inseparable,” he said.

Buhari had left Ebonyi State on Tuesday after a series of engagements before arriving in next door Anambra State where gubernatorial elections are due on November 18, 2017.

He joined the final rally of the ruling All Progressive Congress (APC) rallying supporters to turn up and vote for the party’s candidate.

IPOB has called for a boycott of the polls asking people to stay at home on the day of the vote. They even threatened those who defied their calls with death. Despite a vow to disrupt Buhari’s visit, nothing was heard from the group throughout Buhari’s engagement.

Biafra separatists checked as Buhari gets top title on visit to Igboland https://t.co/qtBGjeI19I

A major highlight of his time in Anambra was his directive that security detail of the incumbent governor, William Obiano be fully reinstated. The governor had been without security aides after they were withdrawn by the Inspector General of Police.