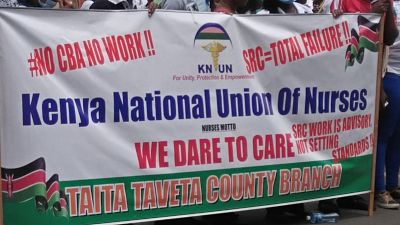 Kenyan nurses on Thursday called off their five-month-long strike after reaching an agreement with the country’s Council of Governors (CoG), Xinhua reports.

Kenya National Union of Nurses (KNUN) Secretary-General Seth Panyako said the collective bargaining agreement (CBA) will be implemented fully within 30 days and urged the nurses to resume work on Friday.

“I hereby declare that the strike that began on June 5 is officially called off and our members are advised to go back to work with immediate effect, by Friday at 5 p.m.,” Panyako told journalists in Nairobi.

He said the health workers will have their nursing, uniform and nursing service allowances increased. The two sides also agreed that all cases related to the dispute currently before court will be withdrawn, Xinhua further reports.

The strike paralyzed the health sector in the country with patients forced to seek expensive services in private hospitals.

CoG Chairman Josphat Nanok said the agreement followed a lengthy consultative meeting within all stakeholders, noting the industrial action was prolonged after it became the subject of “so many months of back and forth”.