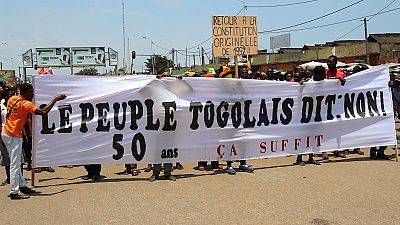 Twenty-six Togolese nationals have been arrested in Ghana for organising a protest in the capital Accra without notifying the authorities.

The protesters were arrested on Saturday after converging at a park in solidarity with Togolese opposition supporters demanding the resignation of Faure Gnassingbe and the reinstatement of Togo’s 1992 constitution.

The Ghana police spokesperson Afia Tenge told local media that their convergence without notification was a clear breach of the public order act.

“Two of their leaders and a number of them were arrested. We have about 26 of them and we are waiting for Monday to put these persons before the law court,” she said.

Two of their leaders and a number of them were arrested. We have about 26 of them and we are waiting for Monday to put these persons before the law court.

Ghana is reported to have registered 513 Togolese asylum seekers who fled from the chaos into border towns including Chereponi, Zabzugu and Bunkpurugu-Yunyuo in northern Ghana.

Ghana’s Foreign Affairs Minister, Shirley Ayorkor Botchway told local media Citi FM that consultations are ongoing with the Togolese government on the crisis in the country.

Togo faced a series of opposition demonstrations since August in demand for the resignation of President Faure Gnassingbe and the reinstatement of the 1992 constitution.

The intended peaceful demonstrations resulted in the killing of at least 16 people after clashes with security forces who fired tear gas and live bullets to disperse the protesters.

The opposition are also calling for a two five-year term limit for presidents as well as a two-round voting system.

The government banned weekday demonstrations yet the protesters defied the ban and stormed the streets last week resulting in further clashes.

The six-party opposition coalition (CAP 2015) and the Pan-African National Party (PNP) have called for another series of demonstrations on November 7, 8 and 9 – which are weekdays – despite the ban on weekday protests.