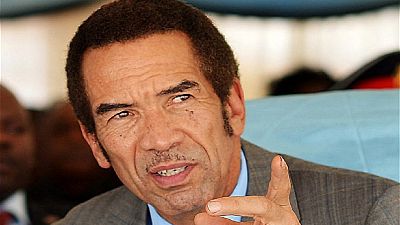 Botswana has condemned the signing of the independence declaration of Catalonia from Spain which the southern African country described as “unilateral” and “illegal”.

The Botswana government said in a statement on Wednesday that it does not support the “dismemberment of a country that is not negotiated and agreed” and will not recognise Catalonia.

“In this day and age, we expect people in nations to strengthen their unity and not engage in divisive actions based on race, ethnicity religion or language.

“In view of the challenges that currently confront humankind, it is critical that nation states should more than ever uphold the spirit of unity in diversity, and not to engage in divisive actions,” said the statement posted online by the government.

In this day and age, we expect people in nations to strengthen their unity and not engage in divisive actions based on race, ethnicity religion or language.

The statement called for respect of the sovereignty and territorial integrity of all countries especially by its nationals.

Botswana made reference to the unification of Germany which it described as an “excellent example” while condemning Kosovo, which it says it does not recognise in line with the principles of international law.

The Spanish region of Catalonia led by its President Carles Puigdemont and other regional leaders signed a declaration of independence from Spain following a disputed referendum.

They said the independence will not be implemented yet until after talks with the Spanish government.

They are calling for Catalonia to be recognised as an independent and sovereign state which was largely endorsed in an October 1 referendum that was declared invalid by Spain’s Constitutional Court.

There were violent pro-independence demonstrations in the wealthiest region of Spain fuelled by economic crisis.

Catalonia is an autonomous region of Spain with its own distinct language and culture.