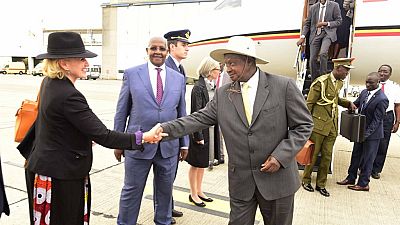 Ugandan president, Yoweri Museveni, arrived in Brussels on Wednesday, the second day of chaos in the legislature where an age limit motion is being pushed.

He confirmed that he was in Brussels for a three-day official visit during which period he will confer with European Union (E.U.) over the Economic Partnership Agreement (EPA) and other related issues.

The 73-year-old, current president of the East Africa Community (EAC) is seen as the direct beneficiary of the proposed law seeking to scrap presidential age limits – the biggest hurdle yet to his continued stay in power.

Parliament was plunged into chaos when Members of Parliament (MPs) on both sides clashed over the age limit motion. Aside the exchange of fisticuffs, chairs were used in the attacks as MPs jumped over seats. Some had to be wrestled out the chamber by security detail.

Meanwhile, the motion was passed on Wednesday by a one-sided chamber as opposition MPs walked out. The speaker was forced to suspend 25 MPs for unparliamentary conduct. They are to stay away from proceedings for three sittings.

The 73-year-old will be ineligible to stand by 2022 when next polls are held. Under Uganda’s current laws, a person above the age of 75 cannot vie for the office of president. Museveni, a former soldier, has been democratic president of the country for over two decades.