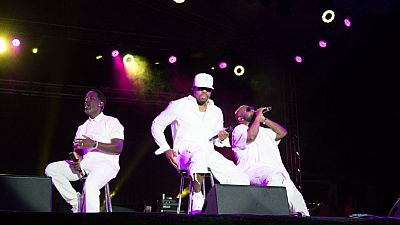 The trio performed their hit songs as headline artistes for the two-day Stanbic Music Festival held over the weekend.

They opened their performance with the 1991 debut single for their debut album Cooley high harmony – Motown Philly – which set the crowd in the mood for more.

Hit after hit, they kept up the tempo with On Bended Knee, Its So Hard to Say Goodbye to Yesterday, Water Runs Dry, I’ll Make Love to You among other popular hits.

The award-winning acapella harmony group made up of Nathan Morris, Shawn Stockman and Wanya Morris has been performing for 26 years.

This is not their first concert in Africa. They performed in Cape Town, South Africa in 2015.

The group expressed gratitude to Zambia for hosting them and showing them love.

September 19th marked 26 years of doing what we do. When doing it for so long u can tend to get jaded….but when you leave the continent to perform, and 26 years later people are still singing you music at the top of their lungs u remember what it’s all about. It is and has never been about you …..it’s not all about you. I thanks God for using us to musically spread the mead sage of love around the world! Thank you #Zambia