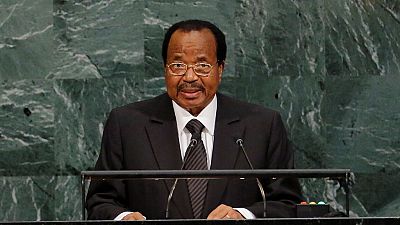 Cameroonian President Paul Biya has appealed to the world to save two of Africa’s biggest natural habitats in his address to the United Nations General Assembly (UNGA) in New York.

Even though his address focused more on the urgent need to secure world peace, his speech also stressed the need to save the Congo Basin and the Lake Chad region.

Immediately after underscoring the need for firm action on the Paris agreement, Biya said: “For Africa, there are two major challenges. Firstly, ongoing forest degradation in Central Africa. Let us save the Congo Basin, the earth’s second lung.

Ongoing forest degradation in Central Africa. Let us save the Congo Basin, the earth’s second lung.

“Secondly, the desertification of Lake Chad, which is drying up. This vast body of water, which is essential for the survival of communities and biodiversity, has already lost 90% of its initial surface. Let us save Lake Chad!

“By so doing, we will be contributing towards preserving the planet for the greater good of humanity,” he added.

According to a report by environmental protection group, Greenpeace, every year approximately 3 million cubic meters of timber leave the Congo Basin to Chinese cities with considerable amounts resulting from illegal logging.

This practice which is contrary to the applicable standards of protection is made possible by the absence of China’s legislation banning the import of illegal timber, a May 2016 report by the group added.

The Lake Chad region is one beset by terrorism from Boko Haram militancy – which was also key in Biya’s address and also from a resulting humanitarian crisis. The displacements across the region has been worsened by a biting drought.

Aid agencies continue to seek millions of dollars to help cater for people who have been affected by the drought. Dry conditions have also hit much of east and southern Africa arising from the El-Nino effect.