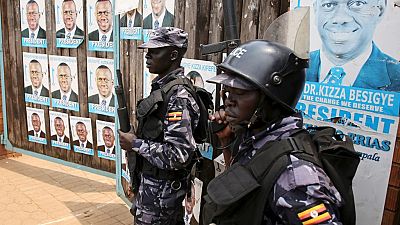 Ugandan police have arrested five Makerere University students and the Mayor of the capital city Kampala, while offices of the opposition Forum for Democratic Change (FDC) were sealed off Thursday morning to stop planned protests against the removal of presidential age-limits.

The five students were arrested after teargas was fired to disperse dozens who joined planned march from their campus in Kampala to parliament to petition the speaker against the removal of presidential age-limit.

The Kampala City Lord Mayor Erias Lukwago was also picked up from his home and sent to the Kira police station over plans to march from the city hall to the city square with other city leaders to campaign against the removal of age-limit, local media Daily Monitor reported.

The police also sealed off the offices of the opposition Forum for Democratic Change (FDC) to prevent them from staging a similar march to parliament in order to petition the speaker against the proposed amendment.

They published letters sent to the police days earlier seeking permission to embark on the procession.

FACTS: Here are the copies of the letters we delivered to Parliament_UG & PoliceUg, also attached are copies of our delivery book. pic.twitter.com/7tBDfMqDGb

The marches are in contravention with the Wednesday night ban on processions by the police which said the ban applies to both those against and for the age-limit.

Press Release: IGPUGANDA on planned processions in the city. pic.twitter.com/LM1v6QtawQ

There is heavy police presence around the parliament and the city centers.

The debate starts on Thursday and if the amendment is approved, President Yoweri Museveni can contest in the next elections.