Pineapple production in Benin bounces back after suspension [Business Africa] 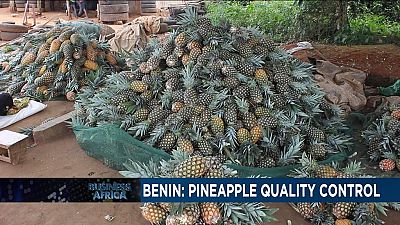 ‘Sugarloaf’ and ‘Smooth Cayenne’ are the two main varieties of pineapple grown in Benin republic , but there have been some reports showing a high concentration of Ethephon used to speed up the pineapple ripening process.
To that effect, the cultivation and exportation were suspended in December 2016 until of recent .

Unlike the coffee sector in Burundi, where privatization has failed, the tea sector is experiencing a boom.
Quite a number of changes were brought into the sector since its privatization in 2011.

Tea is Burundi’s second-largest source of hard currency behind coffee and supports 300,000 farmers in a nation of 10 million people. The tea growers seem satisfied with the liberalization of the tea sector.

William Bayiha, Africanews journalist was on set to speak further on the challenges of Agribusiness in Africa.