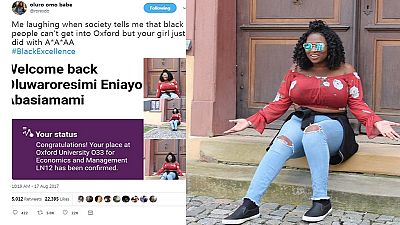 A Nigerian woman, like Pakistani Nobel Prize laureate Malala Yousafzai took to Twitter to celebrate her admission to the prestigious Oxford University in the United Kingdom.

Oluwaroresimi Eniayo Abasiamami’s tweet on Thursday was slammed online among the many congratulatory messages she received.

“Me laughing when society tells me that black people can’t get into Oxford but your girl just did with A*A*AA #BlackExcellence.”

Me laughing when society tells me that black people can’t get into Oxford but your girl just did with A*A*AA#BlackExcellence pic.twitter.com/cp4mqwlUSh

The replies started in positive congratulatory tones until the first troll (a person who sows discord on the Internet by starting quarrels or upsetting people, by posting inflammatory, extraneous, or off-topic messages in an online community) replied: “Had to make it a race issue”.

Had to make it a race issue

This opened the floodgates for a debate on race and if Oxford University admits many black students or not.

Honestly who ever said black people can’t get into Oxford? If I cared, I’m sure I’d find the stats for demographics online of the students..

It’s already a race issue, she didn’t make it one. Congratulations are in order! https://t.co/IVGpYpycx1

Oluwaroresimi Eniayo Abasiamami left the debate to respond to the congratulatory messages she was receiving including one that gave her a message to give to Malala who also gained admission to the university.

She explained in some replies that she personally faced people who told her she couldn’t make it to Oxford University and she did.

She deleted the replies and tweeted: “This tweet has also sparked some debate. I was gonna try and start explaining myself to everyone but something in my spirit told me not to.”

Oluwaroresimi expressed gratitude to all those who wished her well.

So this was unexpected
I thank everyone for their encouraging messages I really appreciate it https://t.co/XUhLHMuxlI