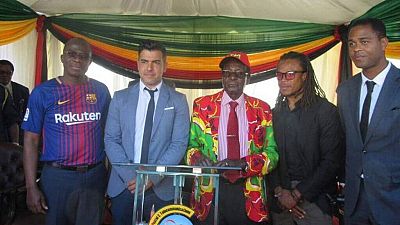 Former Barcelona players, Patrick Kluivert and Edgar Davids, were in Zimbabwe over the weekend. The two former Dutch national team players however made the headlines not for their sporty involvement but for a political reason.

Davids, 44, and Kluivert, 41; were present at a political rally organized by the ruling Zanu-PF on Saturday. Their visit is a prelude to a November game involving high-profile former players of the Spanish and European giants.

Photos from the rally showed the two players in a front row seat but they did not make any pronouncements at the event. They, however, took photos with Mugabe in what was termed a “surprise appearance” at the Zanu-PF youth rally in the southern town of Gwanda.

Before the rally, the duo had met with Vice President Emmerson Mnangagwa, they presented him with a Barcelona shirt to be given to the president. The number 10 shirt had R. G. Mugabe boldly inscribed at the back.

93-year-old Mugabe has led the country since independence in 1980. He is seeking re-election in polls set for next year.

The presence of Kluivert and Davids, and the idea of the scheduled game has, however, provoked anger among political opponents, who describe it as unnecessary for a country suffering from economic crisis.

“It is a total disgrace, they should be ashamed of themselves, they seem to be supporting a tyrant,” Obert Gutu, opposition party spokesman for the Movement for Democratic Change (MDC), told AFP stressing that many Ziumbabweans were offended.

Both trained at Dutch side Ajax Amsterdam, Kluivert and Davids went on to play for Barcelona respectively between 1998 and 2004, and 2003 and 2004.