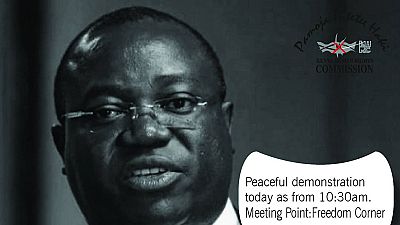 <p>Kenyan dailies on Tuesday dedicated their front pages to the death of the country’s elections technology expert who was found dead on Monday after he was declared missing on Sunday.</p> <p>Chris Msando’s death and issues related to it covered the ‘The Standard’ which posed ‘Ten tough questions on killing of <span class="caps">IEBC</span> expert.’ The ‘People Daily’ disclosed that police were retracing Msando’s last steps.</p> <p>‘The Star’ cited the elections chief’s request for the killers of the IT expert. The ‘Business Daily’ story title ‘<span class="caps">IEBC</span>’s head of IT killed and dumped in Kiambu’ led with photo of grieving loved ones.</p> <p><img src="https://static.euronews.com/articles/38/11/381146/1024x576_bonus-Msando1.jpg" alt="" /></p> <p><img src="https://static.euronews.com/articles/38/11/381146/1024x576_bonus-Msando3.jpg" alt="" /></p> <h3> Protesters march to <span class="caps">IEBC</span> demanding justice </h3> <p>Protesters marched on the offices of Kenya’s election commission on Tuesday, demanding a speedy enquiry into the murder of a senior official that has raised fears over the legitimacy of next week’s national vote.</p> <p>Chris Msando, the election board’s head of information, communication and technology, was tortured before he was killed, authorities said.</p> <p>He oversaw the live transmission of election results, a contentious area that the opposition has said could be used to rig next Tuesday’s presidential and parliamentary polls.</p> <p>“It is important that security agencies expedite investigations as a matter of utmost urgency,” prominent anti-corruption campaigner John Githongo said on the march, flanked by about 25 protesters.</p> <p>“The timing of his torture and murder serves to undermine Kenya’s election management body,” he added as the group sang and held up banners denouncing the killing.</p> <p>Police found his body and took it to the mortuary on Saturday, officials said. The election board announced his death on Monday.</p> <p>Msando’s body had deep lacerations on his hands and arms and he had been “unmistakably” tortured, an official at the commission told Reuters.</p> <p>A woman who had been shot in the head was found next to him, the official said, without identifying her.</p> <p>Authorities did not say where he was found or suggest a motive.</p> <h3> Opposition reacts to Msando’s murder </h3> <p>The opposition called for outside experts to help ensure the credibility of the elections.</p> <p>“This murder has jeopardised Kenyans’ faith in the credibility of the electoral process,” Musalia Mudavadi, a key ally of opposition leader Raila Odinga, told journalists.</p> <p>“To restore the shaken confidence in the electronic systems that are key to the credibility and the success of the election …the (elections body) should immediately secure the services of an internationally recognised expert in the area.”</p> <p>Both the United States and Britain offered to help Kenya investigate the murder, without saying how.</p> <p>Odinga, who is standing again against incumbent President Uhuru Kenyatta, has said the last two elections were rigged.</p> <p>In 2013, Odinga took his complaints to court and the elections were largely peaceful. But in 2007, he called for street demonstrations. The political protests and the ethnic violence that followed killed more than 1,200 people and forced another 600,000 to flee.</p> <h3> <h3><strong><span style="color:blue;"><span class="caps">SUGGESTED</span> <span class="caps">READING</span></span></strong> <a href="http://www.africanews.com/tag/africa-elections/" target="_blank">Visit our Africa elections page for more news</a> </h3>