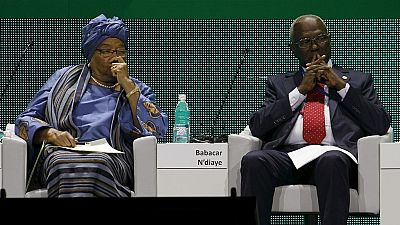 The Senegalese economist passed on at the age of 82 after an illness that admitted at the a medical facility in the Senegalese capital, Dakar. The African Union boss, Moussa Faki Mahamat was one of the persons who reacted to the death.

As a seasoned economist, Ndiaye is recognized for the momentum he gave to the continent’s economy during his decade in charge at the AfDB.

The African Union family is deeply saddened by the passing of Dr Babacar Ndiaye, former head of the AfDB Group.

The _AfricanUnion family is deeply saddened by the passing of Dr Babacar Ndiaye,former head of the AfDB_Group. May his soul rest in peace.

He is credited with helping the emergence of young entrepreneurs who have become builders of Africa. He is seen as a pillar behind in the affairs of the bank long after his tenure which spanned between May 1985 and August 1995.

Last May 22-26, at the 52nd annual meeting of the African Development Bank, in India, Babacar Ndiaye was once again one of the illustrious participants.

He was the first president to have a ten-year tenure. Since he left, two others have chalked the same duration. His Moroccan successor Omar Kabbaj (1995 -2005) and Rwandan Donald Kaberuka (2005 – 2015).

Kaberuka and the the current president, Akinwumi Adesina have all lamented the loss of Ndiaye through Twitter.

I have learnt with shock and sadness the passing of my brother ,friend and predecessor #BabacarNdiaye AfDB_Group President (1985-1995).RIP

Former President of AfDB, #BabacarNdiaye, just passed away. He was a true panafrican and a friend. We are missing him already. Really sad. pic.twitter.com/9h7EzPAE74