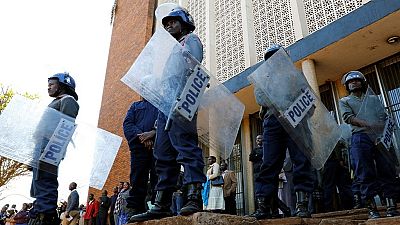 A Zimbabwean court has dismissed the public violence case against 51 anti-Mugabe protesters who were arrested in July 2016.

The protesters were arrested during demonstrations in the capital Harare, led by Pastor Evan Mawarire who is facing charges including violence and attempted sabotage of the Zimbabwean government.

They were subsequently released on bail.

According to the Zimbabwe Lawyers for Human Rights, Harare Magistrate Lanzini Ncube dismissed the case due to “failure to prove the essential elements of the charge”.

Series of demonstrations were held last year against the government as a result of the failing economy.

The protests turned violent when police physically intervened after some protesters burned down shops and public buildings in anger.

Convener of the protest, activist Pastor Evan Mawarire was arrested by police in February 2017 while returning from a six-month exile in South Africa where he had fled after he had been briefly locked up.

The pastor made a name for himself in April 2016 by publishing a video that quickly became viral on the Internet in which he appeared with the Zimbabwean flag in a sling to denounce the corruption of the regime and the difficult living conditions of the population.

He is also accused of using social media to urge Zimbabweans across the globe to revolt against President Robert Mugabe. He was released on bail after spending some time in jail.

Although not affiliated with any political party, Mawarire has announced that he was considering running for the 2018 general election against President Mugabe.

The trial against him will commence at the Harare High Court on September 25.