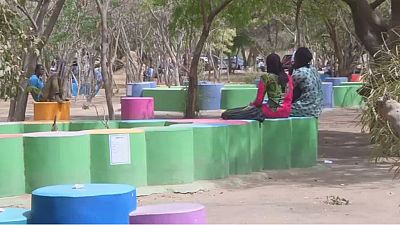 At a school in Keur Moussa, 40 kilometers from Senegal’s capital Dakar, pupils are working hard on a recycling project: making benches out of old tyres and rubbish.

Students first fill the tyres with non-biodegradable waste and some dirt to form a strong, solid base.

Ousmane Sow, who heads the project under French NGO, 3000 Ecomen said students now understand that waste goes here and not there, so as to make something useful out of it.

At first there were no garbage bins in the school, but since we started to build those recycled benches, the school started to bring some bins.

“At first there were no garbage bins in the school, but since we started to build those recycled benches, the school started to bring some bins. What we see as rubbish, for example when someone buys a drink, they drink and throw away the bottle. It’s not like that now, what we throw away is more valuable,” he said.

Authorities have launched several initiatives to fight against pollution, including a ban on plastic bags, but these have not been successful.

Senegal produces about 2 million tonnes of waste a year. The initiative is aimed at teaching students about waste management and recycling.

“Yes it’s important that the school is clean because people come here and see a clean school, and that is good.
Having a clean school is good because anybody can come here to visit, to look and so the school should be clean,” said one pupil working on the project, Oureye Diakhate.

So far seven benches have been built at the Keur Moussa Secondary School, and teachers say there is more awareness about keeping the school clean and organizing waste.

Once the tyres are filled with waste and sand, they are wrapped with a wire mesh and covered in a mixture of cement and water, then left to dry.

“It allowed us to pick up waste and recycle, which is already a first step towards improving the school’s environment because all the bags and empty bottles that were lying around were picked up, put inside the tyres, compacted, and that really enabled us to clean the environment around us,” said Keur Moussa Secondary School supervisor, Anis Seck.

3000 Ecomen has completed over 50 projects, building benches in school yards and other common areas. More than 16,000 tyres and 17,000 tonnes of waste have been recycled and transformed by the organisation’s projects in Senegal alone.