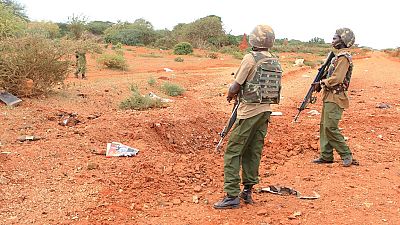 A roadside bomb killed two Kenyan police near the Somali border on Thursday, police said, making it 11 Kenyan security officials that have been killed by roadside bombs over the past two days.

The string of bombings, most of which were claimed by Somali Islamist insurgents, underscores the difficulty facing Kenya’s government as it tries to secure the country ahead of national elections scheduled for Aug. 8.

“Our officers were going to boost an ongoing operation at around 10 am and on the way their vehicle was hit by an IED (improvised explosive device) around the Liboi area, which is near the location of yesterday’s attack,” Garissa County Police Commissioner James Kianda, told Reuters by phone.

Liboi is in the northeast of the country on the Somali border.

“We lost two officers and two others were injured. Of course this is the work of al Shabaab, and that is why we have a major operation currently going on across the county,” he said.

Al Shabaab, which has launched devastating attacks on civilians in Kenya, says it is fighting because Kenya sent troops into Somalia in 2011 after a string of attacks and kidnappings on Kenyan soil.

The Kenyan soldiers are there as part of a 22,000-strong peacekeeping force intended to shore up the weak U.N.-backed government.

Somalia has been riven by civil war since 1991, when clan warlords overthrew a dictator then turned on each other.