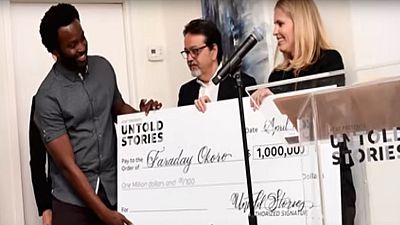 The award is in partnership with the Tribeca Film Festival aimed at discovering scripted film projects from women and minorities – who historically have not been well-represented in Hollywood.

The winner was announced last Friday and the Nigerian filmmaker’s project beat four other projects in contention for the inaugural program.

The “Nigerian Prince” was written and directed by Faraday Okoro, and then produced by another Nigerian, Biyi Bandele and Oscar Hernandez-Topete.

The story is about a stubborn Nigerian-American teenager who was sent back to Nigeria against his will. He joins forces with an internet scammer in order to return to the United States.

The filmmakers were given 10 minutes each to pitch their ideas in New York on April 18 to a panel of industry judges before the winner was selected.

The five finalists for “Untold Stories” were selected from among about 50 scripts submitted after a call for entries.

The “Nigerian Prince” will be presented as a world premiere at the 2018 Tribeca Film Festival and then distributed across AT&T’s video platforms, including DirecTV, DirecTV Now and and U-verse under a five-year license.