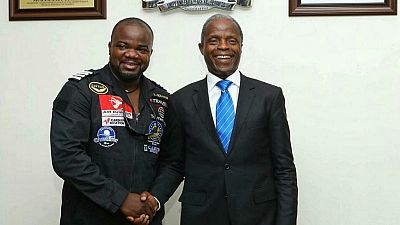 Nigerian Vice President has stated that citizens of Africa’s most populous nation are among the world’s ‘most creative and smartest persons,’ in a statement released by his media aide.

Prof. Yemi Osinbajo met with the Nigerian pilot who recently chalked the feat of flying solo across the world, Ademilola ‘Lola’ Odujinrin. The 38-year-old met with the veep at the presidency on Wednesday evening.

The statement titled ‘NIGERIANS AMONG THE MOST CREATIVE, SMARTEST PEOPLE IN THE WORLD, SAYS VP OSINBAJO,’ read in part, ‘‘the country is blessed with great talents and Nigerians are among some of the most creative and smartest persons around the world.’‘

The country is blessed with great talents and Nigerians are among some of the most creative and smartest persons around the world.

State House Nigeria release Press Release on how ‘Nigerians are among the most creative, smartest people in the world’ pic.twitter.com/niEz6GnMio

The veep also lauded the pilot and pledged support for his humanitarian project which he advised him to focus on and to expand.

‘‘Your story is fascinating and I am extremely proud of what of what you have done and more that you are Nigerian and I am very sure that just as we took over the entertainment industry, we will certainly break new grounds,’‘ Osinbajo added.

Odujinrin, a Boeing 737 pilot with Air Djibouti, spent just over eight months to complete the historic feat, flying a single-engine light aircraft across five continents with estimated 35 stopovers in 25 countries.

‘‘Ever since I was a child, I dreamed of one day flying around the world. We have a responsibility to lead by example and follow our dreams. I want African children to think: ‘I can do this too’, he told the BBC in an interview.

The father of two touched down Wednesday at after visiting 20 countries on five continents in his record bid, which began at the same airport on.

The journey which started from the Washington’s Dulles Airport on 26 June 2016, covered a 29,000 nautical miles across countries that included the US, Cameroon, Iceland, France, Egypt, Kenya, Bangladesh and Australia. 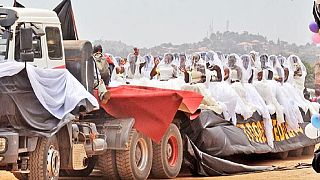