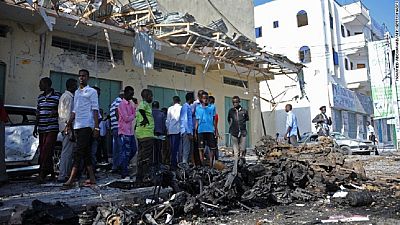 At least seven people were killed and more than a dozen wounded Wednesday in a car bomb explosion in central Mogadishu, police and administrative sources said.

“Seven civilians were killed in the explosion and more than 10 others injured,” a spokesman for the Somali capital Abdifatah Omar Halane told reporters.

The explosion was caused by a vehicle parked near a restaurant close to the Ministry of Homeland Security in central Mogadishu, a police officer Mohammed Ibrahim said.

“It was a big explosion and I saw ambulances rushing to the scene of the explosion and the area was cordoned off by police,” said a witness, Abdisalam Sharif.

The attack was not immediately claimed by any group, but Islamist radicals Al Shabab who are affiliated with al-Qaeda, are known to carry out such attacks in Mogadishu.

A 22,000 strong African Union force in Somalia (Amisom) is helping government soldiers fight off the militants who at one point had taken control of the capital.

Confronted with Amisom’s firepower that was deployed in 2007, al-shabaab were driven out of Mogadishu in August 2011.

They then lost most of their strongholds but still control large areas where they conduct guerrilla operations and suicide bombings.