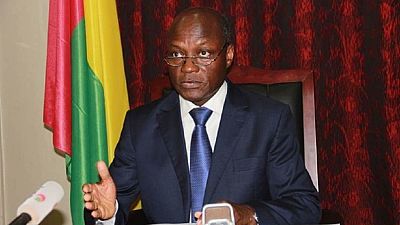 Hundreds of protesters marched in the capital of Guinea Bissau on Saturday to demand the departure of President Jose Mario Vaz, the latest sign of growing anti-government sentiment following an 18-month-long political crisis.

The former Portuguese colony in West Africa has not convened parliament for more than a year and regional talks have failed to resolve deep rivalries within the political elite, raising fears that drugs traffickers could exploit the power vacuum.

There was a heavy military presence at Saturday’s march, where demonstrators carried red cards and blew whistles to symbolize that President Vaz, known as “Jomav” locally, was not playing by the rules.

“We want Jomav to explain why he removed the government of Prime Minister Domingos Simoes Pereira that was on the right track,” said Isabel Gomes Santos. “Now there are shortages of water and power,” she added.

Vaz’s decision in August 2015 to sack Pereira, a popular politician who enjoyed support from Western donors, triggered a period of instability and the appointment of several other prime ministers in quick succession.

None of them have managed to resolve the political deadlock.

The budget program of current Prime Minister Umaro Mokhtar Sissoco Embalo was rejected by the national assembly in February, leading to anti-government protests.

Protests are relatively rare in the former Portuguese colony where instability has typically taken the form of military coups, led by officers drawn mostly from a narrow military elite drawn from an aging batch of soldiers who fought for independence in 1963-1974.

The United States has accused several military officers of also profiting from the drugs trade, using the vast waterways of the poor coastal nation to transit cocaine from South America to Europe.