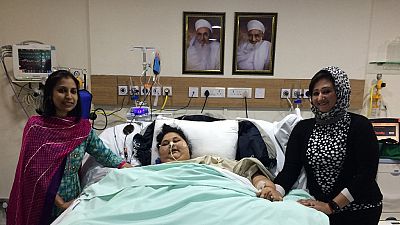 Egyptian Eman Ahmed Abd El Aty, reputed to be the world’s heaviest woman has begun losing a lot of weight three weeks after she was admitted to an Indian hospital. At the time of her admission, she weighed over 500kg.

The Hindustan Times reported that 36-year-old Eman who is currently on a liquid diet that contains proteins and dietary fibers lost 100kg over the period. She is expected to lose 200kg in six months as a result of the surgery and her present diet.

She was admitted to the Indian hospital in February after a Mumbai-based surgeon, Dr Muffazal Lakdawala, raised funds to have her flown over for treatment.

Reports indicate that her weight is due to gland imbalance which caused an accumulation of liquids. Her family says she has not been able to leave home for 25 years.

According to the Indian surgeon, he believes Eman suffers from obesity-related lymphoedema which causes swelling of her legs.

It took the intervention of the surgeon who tweeted to India’s foreign minister before the Indian embassy in Cairo agreed to issue her a visa. The Hospital built a special facility to enable the weight reduction surgery.

The BBC reports that the facility at the Mumbai Saifee Hospital has an operating theatre and an intensive care unit. She was flown out of Cairo to Mumbai on a chartered flight.