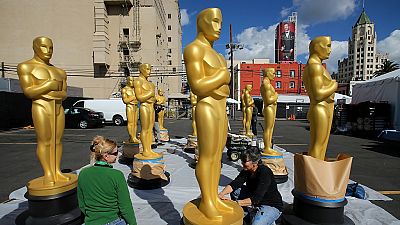 Preparations are underway for this Sunday’s 89th annual Oscars ceremony in the United States with the ceremonial rolling out of the red carpet that took place on Wednesday afternoon.

The event will bring together Hollywood’s biggest stars with the hope of winning an iconic gold statuette at the industry’s oldest entertainment awards ceremony.

Crews rolled out hundreds of feet of plastic sheeting to protect the carpet as rain is expected during the festivities.

Time-lapse shows the transformation so far in front of Hollywood's Dolby Theatre as preparations are well underway for next weekend's Oscars pic.twitter.com/JguEImN3Y1


This is what Joe Lewis, Head of Production for the Oscars Red Carpet had to say:

“The most difficult part is mother nature and the weather. That’s always the wild card. You know, we don’t really know what’s going to happen. Today, we shift from the guest experience focus to the broadcast focus. But now also today, weather seems to be ever-present on Sunday. So that’s what we’re really focusing on now.”

This year has proved to be a much stronger year for diversity as critics have praised this year’s Academy Awards for not being so white as was the case in the previous years.

Films like “Moonlight,” “Fences” and “Hidden Figures” will be vying for best picture, though the two-horse race in the category is going to be between romantic musical comedy “La La Land” and “Moonlight”.

A number of actors are up for an Oscar including Denzel Washington in the best actor category, Viola Davis for supporting actress, Mahershala Ali for his supporting role in the movie “Moonlight”.

African films missed out in the list of movies nominated for the Best Foreign Language film in this year’s Oscars.

The category has been dominated by European movies. The last time an African film was nominated was in 2014, when Mauritania’s Timbuktu made the list of nominees for the Academy Award.

In the same year, Kenya’s Lupita Nyong’o made history by becoming the first Black African to win an Oscar.