Namibia introduces itself to Donald Trump in new satirical video 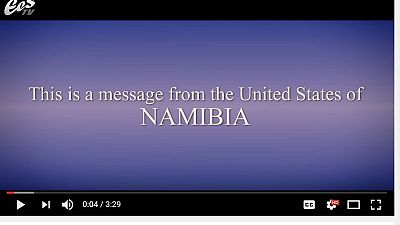 What comes to your mind when Namibia is mentioned? Well, from Namibia now comes a video designed to introduce the country to U.S. President Donald Trump, in ways that will probably appeal to him the most.

In the video, the Trump sound-alike narrator details all the things to love about the southwest African nation, including its culture, its mixture of tribes, a fairly large wall built around the Namibian State House, the food and a “great tower” shaped like a coffee machine that the country “let the North Koreans” build.

The video was produced by Namibia’s Foreig Ministry? Wrong! It is the work of Gondwana Collection Namibia, a company that operates lodges and works on nature preservation in the country. It is in fact a response to a video put out last month by “Zondag Met Lubach,” a Dutch news satire show, which attempted to introduce Trump to their “tiny country” in a style he might be used to. For example, when describing the Dutch language: “We’ve got the best words. All the other languages failed.”

Whether the video will get Namibia on Trump’s radar is unclear, however: Trump appears to have never mentioned or visited the country, according to news archives and his own Twitter history. – Washington Post.

Namibia, a large and sparsely populated country on Africa’s south-west coast, has enjoyed stability since gaining independence in 1990 after a long struggle against rule by South Africa, according to it’s country profile on BBC.

Germany took control of the area which it called South West Africa in the late 1800s. The discovery of diamonds in 1908 prompted an influx of Europeans.
South Africa seized it during the First World War and administered it under a League of Nations mandate, the profile further reads.

Namibians achieved independence in 1990 after a bush war of almost 25 years. Inter-racial reconciliation encouraged the country’s white people to remain and they still play a major role in farming and other economic sectors.