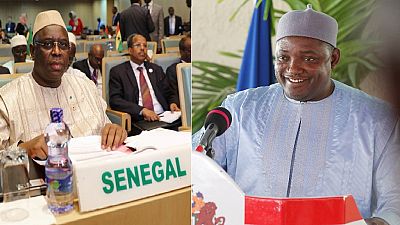 The Gambia has expressed gratitude to its only landed neighbour, Senegal, for its intervention in the post election crisis. Senegal’s efforts in terms of mediation and by military intervention resulted in the peaceful transfer of power for the first time in the Gambia’s history.

Gambian vice-president, Fatoumata Tambajang, was in Dakar on Monday where she met with President Macky Sall, she emphasized the relationship between the two countries describing it as a ‘family’.

‘We are happy to be here, Senegal and Gambia are the same, we are family, we share the same culture and societies,’ she added that she had met with President Sall at the just ended African Union summit in Addis Ababa where they discussed cooperation between the two countries.

We are happy to be here, Senegal and Gambia are the same, we are family, we share the same culture and societies.

Senegal was the first country to slam former leader Yahya Jammeh for his U-turn a week after conceding the December 1, 2016 polls to opposition coalition candidate, Adama Barrow.

They were also key in welcoming fleeing Jammeh appointees who feared for their lives. The electoral commission chief and several other top officials sought refuge in Senegal.

President Macky Sall was also key in deliberations of the regional political bloc, ECOWAS, in trying to mediate the impasse. After the mediation failed, Senegal led the ECOWAS military mission deployed to oust Jammeh and to enforce the will of the Gambian people.

Senegal also hosted then president-elect Adama Barrow on the request of ECOWAS. Barrow was flown out of the country with days to his investiture due to rising political tension. Eventually he took his oath of office at the Gambian embassy in Senegal.

He returned to the country four days after Jammeh had agreed to leave to Equatorial Guinea via Guinea Conakry where he is currently exiled. Relations between the two countries had soured in recent past but this visit shows the Barrow administration is set on mending the fences.