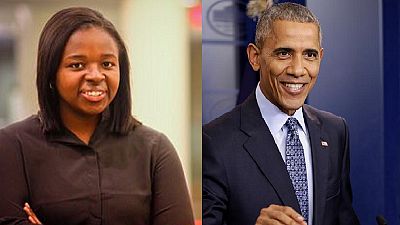 A Nigerian law student at Harvard University has been announced as 131st President of the Harvard Law Review (HLR).

Imelme Umana becomes the first female president of the HLR and occupies a post that was held by former United States President Barack Obama, who incidentally was also the first black man to be elected US president.

President Obama served as President of the 104th volume of the review in 1991. Imelme is listed on the group’s website among its editors. She belongs to the 2018 Harvard Law School group. About 7 US Supreme Court judges have previously held the post.

The organization is formally independent of the Harvard Law School. Student editors make all editorial and organizational decisions and, together with a professional business staff of three, carry out day-to-day operations.

Congratulations to ImeIme Umana, the 131st President of the Harvard Law Review.

The Black Law Students Association of the school also took to their twitter handle to congratulate Umana on her feat. They particularly mentioned the fact that she was the first black woman to be elected.

Congrats to Imelme Umana, HLS '18, on her selection as President of the Harvard Law Review. 1st black woman to serve as President. #Herstory pic.twitter.com/liqu40K4Va

According to its website, ‘‘The Harvard Law Review is a student-run organization whose primary purpose is to publish a journal of legal scholarship. The Review comes out monthly from November through June and has roughly 2,500 pages per volume.

‘‘The organization is formally independent of the Harvard Law School. Student editors make all editorial and organizational decisions and, together with a professional business staff of three, carry out day-to-day operations.’‘

Aside the HLR being an academic forum for legal scholarship, it also serves two other goals. First, to be an effective research tool for practicing lawyers and students of the law. Second, to provide opportunities for Review members to develop their own editing and writing skills.

‘‘The Review publishes articles by professors, judges, and practitioners and solicits reviews of important recent books from recognized experts. All articles — even those by the most respected authorities — are subjected to a rigorous editorial process designed to sharpen and strengthen substance and tone,’‘ the website added.

Each issue of the Review contains pieces by student editors as well as outside authors. The latest publication by an outsider was by Barack Obama – who happens to be the first US President to have held that office, his piece is titled, The President’s Role in Advancing Criminal Justice Reform.