Trump's travel ban : The lawsuits on the horizon 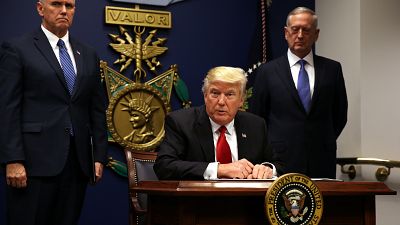 The stroke of Donald Trump’s pen has caused a storm in the United States and beyond. On Friday 27th January, the President used an executive order to block citizens and refugees from seven, predominantly-Muslim countries from entering the US for 120 days. For 90 days, visas will not be granted to citizens of those same nations.

Sean Spicer on Morning_Joe cites San Bernandino shooting as example for #travelban. Shooters had ties to Pakistan, not included in ban. pic.twitter.com/rcWH529Fp6

His December 2015 campaign promise to call for a could yet comeback to haunt Mr Trump in any eventual legal proceedings. He told a press conference: “Donald J. Trump is calling for a total and complete shutdown of Muslims entering the United States until our country’s representatives can figure out what the hell is going on. We have no choice.”

But just a few hours later, the order provoked a barrage of attacks from the American Civil Liberties Union (ACLU), as they readied themselves to defend the first victims of the travel ban. The group reportedly received 24 million USD (22.4 million euros) in donations this weekend. That is six times their yearly average. A federal judge in Brooklyn, New York, also gave them his backing.

The ACLU has raised more than $24 million since Saturday https://t.co/kk2nzeyAFe pic.twitter.com/fAt0sLYQxT

ACLU Executive Director Anthony Romero addressed a large and vocal crowd of protesters, saying: “We’ve shown today that the courts can work. They are a bulwark in our democracy. And when President Trump enacts laws or executive orders that are unconstitutional and illegal, the courts are there to defend everyone’s rights.”

Stand up. Fight back. pic.twitter.com/BK8arbbfYV

What exactly does the lawsuit filed in Brooklyn highlight as illegal or unconstitutional?

The order allegedly does not respect the US constitution’s guarantee of “due process” because it takes away the ability to apply for asylum. Neither is the guarantee of “equal protection” upheld because the executive order discriminates based on someone’s country of origin. Finally, the travel ban is said to not be in line with procedural requirements pertaining to federal rule-making.

Though Trump’s order does not mention specific religions, on Friday, he told the Christian Broadcasting Network that he was acting to help Christians in Syria who were “horribly treated”. It is unclear how the travel ban would do so.

Further, potentially drawn-out, legal challenges are expected. The Council on American-Islamic Relations has said it will soon announce a lawsuit arguing that in targeting mainly Muslim countries, the executive order violates the US constitution’s guarantee of religious freedom.

Iraq has responded to the ban by calling for legislation to ban US citizens entering the country and other nations affected may follow suit. Meanwhile Starbucks, in defiance of Trump’s actions, has promised to hire 10,000 refugees. Several major tech companies in Silicone Valley, including Apple, Google and Facebook have also voiced their opposition.