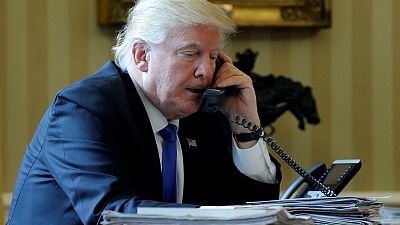 A day after he was visited by UK Prime Minister Theresa May, US President Donald Trump has spent the day in the Oval Office taking congratulatory calls from other world leaders.

The leaders of Russia, France, Germany and Australia were on the list of people to be spoken to.


Trump is on the phone with Putin right now — surrounded by Pence, Priebus, Bannon and Flynn (photo via Spicer) pic.twitter.com/xe4yH6viBv

Agencies cite the Kremlin as saying the mood was for restoring and improving US-Russian cooperation.

Ukraine was discussed, as well as Syria, the Iranian nuclear programme and North Korea.

Both reportedly agreed their priority is to unite efforts to fight international terrorism, coordinating their efforts to defeat ISIL and other terrorist groups in Syria.

Both stressed the importance of restoring mutually-beneficial trade and economic ties between their two countries.

They agreed to keep in regular contact and to work out a time and a place for a meeting.

However, there was reportedly no mention of easing sanctions.

White House senior aide Kelly Conway said the two leaders were expected to discuss a range of issues in the call, including efforts to combat terrorism.

The Russian president planned to use the call to congratulate Trump on taking office and to exchange views on the current state of bilateral ties.

Asked if they would discuss Ukraine, Kremlin spokesman Dmitry Peskov said it was unlikely they would have substantive discussions on the entire range of issues facing their countries as it was their first contact since Trump’s inauguration.

“I know nothing about that”

Asked about media reports that Trump was preparing to lift or soften sanctions imposed on Russia over the conflict in Ukraine, Peskov said “I know nothing about that.”

Sanctions – what they are saying

On Friday, the US Senate’s Republican Majority Leader Mitch McConnell said he opposes any lifting of sanctions from Russia.

“These sanctions were imposed because of their behaviour in Crimea, eastern Ukraine and now we know they’ve been messing around in our elections as well,” McConnell said.

“If there’s any country in the world that doesn’t deserve sanctions relief, it’s Russia.”

During their phone call, President Trump reportedly accepted an invitation from the German chancellor to attend the G20 summit in Hamburg in July.

In return, he invited Angela Merkel to Washington “soon”.

They agreed on the importance of NATO in ensuring peace and stability, adding that member nations should pay their share towards “our collective security”.

The French President warned Trump of the economic and political consequences of protectionism.

Francois Hollande says he told Donald Trump there could be no sustainable or credible solution in Syria without the UN.

He also stressed the importance of the Paris agreement on climate change.