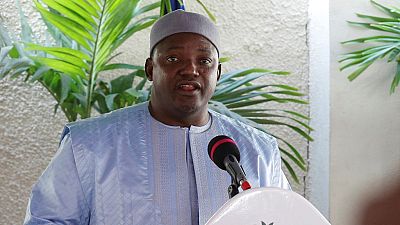 Gambia’s new President Adama Barrow has held his first press conference as president in the capital Banjul on Saturday calling for democratic reforms and free media.

He called for unity and reconciliation to reform and develop the country through democratic lines.

“The field will be level for everybody, and in total reconciliation, if people reconcile, that will unite everybody, and we want to hold that line … My government will look at all areas and there will be a complete overhaul of the system,” Barrow said.

He also decided to maintain the head of the army General Ousmane Badjie and also keep the National Intelligence Agency (NIA) but change its name.

“I think they (NIA) will need more training to be more professional,” he added.

President Barrow announced that The Gambia is a republic and not an Islamic Republic as enacted by Jammeh in 2015 thereby restoring the five-day week making Friday a working day.

He also promised to open the media houses that were closed down during Jammeh’s regime and ensure their independence.

“The media is here to educate people. If you educate them, you have empowered them to make their decisions independently. I think we are thinking in that line, and we will be very very media friendly,” he told reporters, adding “because with the media, you have a lot to learn, with the media, it will help you to improve in where there is lapses.”

He dismissed Jammeh’s stance on the International Criminal Court assuring that Gambia will not pull out and will remain a member.

“I don’t think the Gambia will leave the ICC. If we are talking about democracy, rule of law and human rights, this is exactly what ICC is advocating for. So, why should Gambia be afraid to join,” he stated.

Adama Barrow assured the continuous stay of troops from the Economic Community of West African States (ECOWAS) who entered the country to ensure the safety of Gambian nationals while former President Yahya Jammeh exits.

“There is no time set for ECOWAS stay in the Gambia. They are here to help the process, and I think anytime we don’t need them to continue, this country will work that out so that their services will cease in this country,” he said.

This statement follows reports saying ECOWAS will begin to cut down the number of troops deployed to The Gambia.

Barrow who was sworn-in at the Gambian embassy in Senegal returned to Banjul on Thursday to a rousing welcome by thousands of people who had lined up on the streets.

Adama Barrow had earlier promised to release all political prisoners and set up a truth and reconciliation commission to investigate possible crimes committed by his predecessor Yahya Jammeh who is currently exiled in Equatorial Guinea.