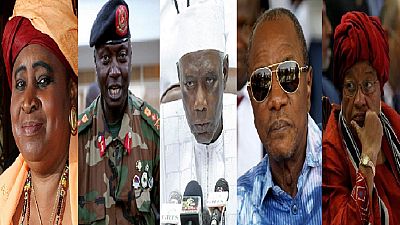 In the middle of the recent Gambian post-election crisis were two main actors, the second and third presidents of the tiny West African country, Yahya Jammeh and Adama Barrow.

Both 51-year-olds were at a point claiming to be President of The Gambia. Jammeh hanging on to power with a state of emergency and an election petition, whiles Barrow drew his ‘power’ from the December 2016 polls.

As things stand now, Jammeh has left the country and is currently in exile in Equatorial Guinea. Barrow who was sworn-in as President in the Gambian Embassy in Senegal returned home four days after Jammeh’s departure.

But this article takes a look at five key political players who helped avert a political crisis and to virtually pull The Gambia from the brink of a full-blown crisis.

As you will see, it could either be an individual or a group of individuals but in the end, their collective efforts played a role at a point or the other to douse the heat and eventually cool the political ambience.

Njie was tasked with leading the country’s electoral body to organize polls that Jammeh was largely expected to win. It was Jammeh’s fifth outing after winning convincingly in 1996, 2000, 2004 and 2008.

Almost 24 hours after polls, Njie announced that results indicated that Jammeh had not just lost but he was ready to concede to the then opposition coalition candidate, now President Adama Barrow.

Then there was a takeover of the IEC’s offices by security operative on December 13 and Njie and his staff were sent home. Njie publicly reaffirmed the results and asked Jammeh to accept them because they were the true representation of the people’s will.

The next that was heard of him was that he had slipped into exile with some of his staff as a result of threats on their lives. He left to Senegal and was fortunate to be part of the group that witnessed the swearing-in of the man he declared president-elect on December 2, 2016.

Ousmane Badjie through the crisis became known for his proclamation of love for his troops and that his men were not going to engage ECOWAS troops if they entered the country to oust Jammeh.

Badjie also spoke about how he was going to welcome the regional troops with flowers and a cup of tea because in his words, ‘there is not going to be any war, this is a political situation and there is no military solution to a political crisis,’ he told DW Africa a week ago.

But long before he took this position The Gambian Chief of Defense Staff had pledged allegiance to then President-elect Barrow and then to Jammeh within the spate of a number of days.

Badjie in a New Year message felicitated with Jammeh and stated that his men had unalloyed loyalty for Jammeh. All said and done, his posturing in the post-Jammeh days contributed to quelling the view that soldiers were going to engage ECOWAS in exchange of fire.

As it stands now, the ECOWAS is busily combing the country for any stash of weapons and also working to guarantee the security of the country. They are currently in charge of the State House – The Gambian seat of presidency. Information has it that they could stay for 6 months.

Isatou like several other Jammeh appointees resigned from their posts increasing internal pressures of ‘loyalists,’ in the former government. Her resignation was the last in a series and was undoubtedly the biggest.

Before her, a number of ambassadors had called on Jammeh to accept the results and back down on his position to reject and order a rerun. Then a number of ministers also tendered their resignations but more often they did so from Senegal where most of them fled to.

The Vice-President who was appointed by Jammeh in 1997 resigned and still remained in the country. Her decision was seen as added pressure on Jammeh to accept a political deal as he was being continually isolated by members of his inner circle.

Under the leadership of Nigerian leader Muhammadu Buhari, and with former Ghana’s former president John Mahama as a co-mediator, ECOWAS tasked the two men plus Chair of the group and Liberian President Ellen Johnson Sirleaf to peacefully talk Jammeh out of his political U-turn.

Two meetings with Jammeh ended inconclusively and Jammeh was bent on staying in power. The efforts of Sierra Leonean leader Ernest Bai Koroma is to be noted as he joined the first mediation round of talks.

The Senegalese President Macky Sall joined the mediation talks that were hosted in Nigeria in the lead up to the second meeting with Jammeh. Sall is one of the first leaders who kicked against military intervention as a means of resolving the impasse.

ECOWAS after its second round of talks took President Barrow out of the country amid tension, he joined leaders at the France-Africa security summit before Senegal accepted an ECOWAS request to host him, eventually, he took his oath of office in Dakar.

These were the two men who managed to get Jammeh out after all was clear that after 22 years in charge, Jammeh had opted that he wanted a military route to leave the presidency. Conde and Ould Abdel Aziz stepped in and did the magic.

What they called the last chance effort ended in a deal that saw Jammeh fly into exile. He had managed to exceed his mandate by some 48 hours. The terms of the deal are not exactly clear but as Ould Abdel Aziz put it, it was a deal that brings hope to the ordinary Gambians.

Other players who added to the pressure and heat on Jammeh to go include the opposition figures who stayed resolute at home while Barrow was out. The AU, UN, EU and governments that denounced Jammeh after his tenure ended were also crucial.

The Nigerian Chief Justice for refusing to sit on two cases that could have scuttled the mediation process was another key player. Jammeh’s poll petition and injunction on Barrow’s investiture failed – reason, there were no judges to sit on the cases.

The social media activists who also kept the news about the country going also played a key role – especially via Facebook and Twitter. Same can be said of the citizenry who held on during the tense periods when the situation looked as though it was headed for a ‘clash.’