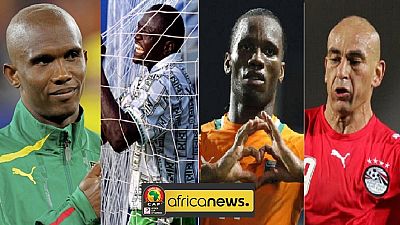 Football comes to life when goals are scored. The first three group games of the ongoing African Cup of Nations (AFCON) has served up four drawn games out of six so far.

Only one game so far has failed to produce goals (Ivory Coast against Togo – first match of Group C). The highest scoring fixture was Algeria’s two-all draw with Zimbabwe. Whiles only Senegal and DR Congo registering wins against Tunisia and Morocco respectively.

As part of our AFCON diaries, we look at the list of top scorers at the AFCON over its 60 years in existence. We look within the 10 goals to 18 goals range which has a total of 12 players represented.

The Cameroonian legend has 18 AFCON goals to his credit. He bagged 10 goals (5 each) between two tournaments in 2006 and 2008. Before then he had hit four goals to end as joint second top scorer with teammate Patrick M’boma in 2000.

The late Ivorian international, Laurent Pokou, was an AFCON goal scoring record holder till in 2008 when Eto’o went past him.

Pokou amassed 14 goals in eight AFCON games in the 1965 and 1968 editions. One of the highlights being a 5 goal rout in the Elephants fixture with Sierra Leone.

Another African football great, late Rashid Yekini of Nigeria played in three tournaments and left behind thirteen goals in between.

Egypt are the most decorated African side in AFCON history with seven triumphs. They are not left out when it comes to goals. Hasan El-Shazly, its top scorer at the AFCON has however not tasted victory with the team.

He hit six goals in the 1963 AFCON but with him in the side Egypt thrice lost their semi-final fixtures, twice to Sudan.

In the high days of Cameroon’s AFCON dominance in the 2000s only one player came close to the impact that Eto’o had on the side, Patrick Mboma – the attacker has 11 AFCON goals.

He ended joint scrorer at the 2002 and 2004 editions of the AFCON. He was also voted the African Footballer of the year in the year 2000.

Somewhat the opposite of his countryman El-Shazly, who dominated the AFCON but failed to win it, Hossam Hassan of Egypt has won three AFCON crowns in successive decades.

His hard luck at the tournament saw him miss spot kicks in two finals – 2006 to Egypt and 2012 to Zambia. Drogba a well decorated player at the club level bagged 11 goals at the AFCON during the time he captained the team. The Elephants will go on to win the trophy in 2015.

Four players are tied on 10 goals at the AFCON, among others, former skipper of the Zambian team, Kalusha Bwalya – currently the Football Association chief, Joel Tiehi of Ivory Coast (part of the 1994 winning squad). The architect of DR Congo’s only AFCON victory Ndaye Mulamba also makes the list of those with 10 strikes.

Mengistu Worku of Ethiopia also has 10 goals over a whooping seven tournaments. Completing the10 goals quartet is Francileudo Santos of Tunisia whose goals were crucial as Tunisia lifted their first and only AFCON trophy when they hosted the tournament in 2004.