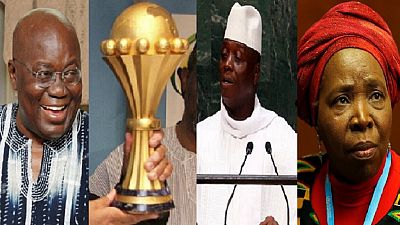 The news year started on a bitter sour note. The political stakeholders in the Democratic Republic of Congo agreed a deal that virtually snatches the country from the brink of increased instability.

Thanks to the efforts of the Catholic bishops of the National Episcopal Conference of the Congo (CENCO), the incumbent Joseph Kabila has agreed to exit this year after polls are held. The good side of the news.

On the not too good side, a Burundian minister was shot dead by an unknown assassin early Sunday morning in the capital Bujumbura. Police confirmed that Emmanuel Niyonkuru, 54, Minister of Water, Environment and Planning, was “killed by a man armed with a firearm, while he was going to his home in Rohero, around 00:45.”

It is in effect a declaration of war and an insult to our constitution. It is therefore absolutely unacceptable. This blatant, impartial and one-dimensional approach clearly indicates that the role of ECOWAS is not predicated on the pursuit of justice in the resolution of this stalemate.

But Africa still has some major events to look forward to in the first month of the new year. Mostly political but of course there is the African Cup of Nations (AFCON) which kicks off in Gabon on the 14th of this month. We look at what to expect in January 2017.

With barely five days from today, Ghana will swear in a new president, Nana Addo Dankwa Akufo-Addo, the serial presidential aspirant recently won the seat he has eyed for two times without success. He becomes the fifth president under Ghana’s fourth republican constitution.

The Electoral Commission (EC) announced Akufo-Addo as President-elect after the verification that Mahama had called to concede defeat in the polls. The NPP also got an outright majority in the parliament with over 170 seats in the 275 seater house.

After the political uncertainty in Gabon following the presidential elections held in Auguts, the draw for the AFCON was successfully held. The competition kicks off on January 14 and ends on February 5, 2017.

There are four host cities (Libreville, Franceville, Oyem and Port Gentil) as Gabon seeks AFCON glory at home and as Ivory Coast attempts to successfully defend their trophy despite being without the Toure brothers – who retired after 2015 and injured skipper, Yao Gervinho.

The groupings are as follows:

Jammeh’s tenure runs out but will he be chased out?

The fourth tenure of Gambian president Yahya Jammeh ends on January 18, 2017. The opposition say they are planning for the innauguration of the president-elect as per the December 1 presidential polls.

Jammeh after an earlier concession says he is going no where until fresh elections are held. His latest notice of staying on was contained in his New Year message broadcast on state television.

‘‘Let me make it clear that we are ready to defend this country against any agression and there will be no compromise for that.’‘

Jammeh in his close to fourteen minutes address used over half of the time to take a dig at the regional political bloc, the Economic Community of West African States (ECOWAS) who are leading mediation efforts in the country following disputed presidential elections on December 1.

‘‘What is clearly incontrovertible is the decision of ECOWAS to implement the results of the December 1st 2016 election results by whatever means possible. It is totally illegal as it violates the principle of non-interference in the internal affairs of member states. Which is an entrenched clause in the ECOWAS treaty.

‘‘It is in effect a declaration of war and an insult to our constitution. It is therefore absolutely unacceptable. This blatant, impartial and one-dimensional approach clearly indicates that the role of ECOWAS is not predicated on the pursuit of justice in the resolution of this stalemate,’‘ he added.

Africa goes in search of its next top diplomat

The continental bloc failed to elect a new Chairperson in Rwanda last year. The new elections will be held during the 28th Ordinary Session of the Assembly of Heads of State and Government from January 30 to 31 at the AU Headquarters in Addis Ababa, Ethiopia.

South African Nkosazana Dlamini-Zuma, agreed to stay her successor is elected later this year. She turned down a second term after serving for a four-year stint between 2012 and 2016.

*The candidates in the running are:*

Other top news stories to look forward to include:

Somalia’s political back and forth continues unabated

Somalia’s elections which started from last year continues into this year. The Horn of Africa country has yet to elect a president. It conducted polls for both chamber of its legislature – the Upper and Lower Houses.

Representatives in both houses will elect a president. But ahead of that, they need to elect speakers for the respective wings. A VOA journalist in Somalia, Harun Maruf, has been tweeting details of the election of speakers and the president.

#Somalia: Officially, still there are no new dates set for the elections of Lower and Upper House Speakers, and President.

Each presidential candidate must collect 20 signatures from MPs, each MP can sign up for up to three candidates.#SomaliaElections

The all-important office in #Somalia seems to be the Presidency; little is known that it's a ceremonial position under the constitution. pic.twitter.com/MZp83qikkp

The 329 members will decide, through a secret vote, who the next president of Somalia. The presidential elections has been postponed for a number of times. The incumbent, Hasan Sheikh Mohamud is up against about 16 other contenders.