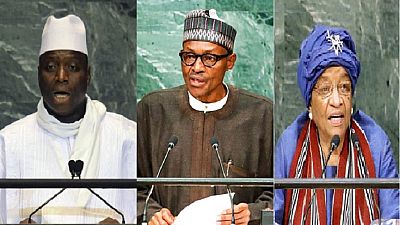 ‘‘Let me make it clear that we are ready to defend this country against any aggression and there will be no compromise for that,’‘ the words of Gambian president Yahya Jammeh in a New Year address broadcast on national television.

Jammeh in his close to fourteen minutes address used over half of the time to take a dig at the regional political bloc, the Economic Community of West African States (ECOWAS) who are leading mediation efforts in the country following disputed presidential elections on December 1.

Jammeh in his address described ECOWAS’s position of “doing all it can” to enforce the poll results as ‘declaring war’ and also an insult to the Gambian constitution which has clear guidelines on how to solve its internal crisis.

‘‘What is clearly incontrovertible is the decision of ECOWAS to implement the results of the December 1st 2016 election results by whatever means possible. It is totally illegal as it violates the principle of non-interference in the internal affairs of member states. Which is an entrenched clause in the ECOWAS treaty.

‘‘It is in effect a declaration of war and an insult to our constitution. It is therefore absolutely unacceptable. This blatant, impartial and one-dimensional approach clearly indicates that the role of ECOWAS is not predicated on the pursuit of justice in the resolution of this stalemate.

ECOWAS is on record to have said that it would take “all necessary actions” to resolve the political deadlock. ECOWAS commission chief, Marcel de Souza warned that a military intervention could be used to restore the people’s wish if mediation efforts spearheaded by Nigeria’s President Muhammadu Buhari, failed to persuade Jammeh to give up power.

Jammeh lost the December 1 polls and earlier conceded defeat to Adama Barrow as president-elect, he however announced an annulment of the results and called for a rerun of the polls citing irregularities in counting of votes according to him as admitted by the electoral body.

ECOWAS appointed Nigerian president Muhammadu Buhari and Ghana’s John Dramani Mahama as lead mediators in the political impasse in Gambia. The group said it will attend the inauguration of Adama Barrow on January 19, a position Jammeh has in the past challenged.

Senegal, Gambia’s only land neighbour has said military intervention will be the last resort and that they hoped Jammeh will see reason and handover executive power peacefully. Senegal’s position is also backed by Guinea. Meanwhile the Supreme Court has scheduled January 10 for the preliminary hearing of a poll petition filed by Jammeh’s party.