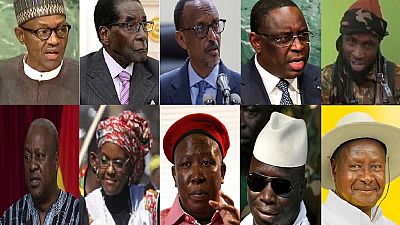 Winding down the 2016 clock, here at Africanews we relive what made the news. This section of our 2016 Review returns to some of the top quotes that newsmakers uttered.

We help you with a context and when the said statements were made. It is dominated by African Heads of State but also in there is Boko Haram leader, Abubakar Shekau. Feel free to pick your best and let us know through our social media handles.

Buhari and his wife and issues of the ‘other room’

“I don’t know which party my wife belongs to, but she belongs to my kitchen and my living room and the other room. So I claim superior knowledge over her and the rest of the opposition, because in the end I have succeeded. It’s not easy to satisfy the whole Nigerian opposition parties or to participate in the government.”

Buhari’s wife Aisha had threatened not to campaign for him in the next elections because his government had been hijacked. He gave the above response whiles on a trip to Germany in October 2016.

“Today we see the steady erosion of values-based solidarity, leading to moral & ideological confusion and new instabilities. Globalisation, technology and experience allow the developing world to pursue same democratic ends in our own ways.”

In September 2016 the Rwandan president was speaking during a lecture at Yale University.

“First, and obviously, we must imperatively strengthen the response capacity of our defense and security forces to deal with asymmetric threats, especially those related to terrorism. Terrorists are not choirboys. They are well organized.”

“Social media should never be used negatively…We should remain clean, clean, clean. I am happy that the Ministry of ICT, Postal and Courier Services is crafting a law to guide the proper use of social media.”

President Mugabe was speaking to Zanu-PF youths in September 2016

Museveni about Gadaffi and a reckless Western ouster

“I needed no lectures on the positive and negative points of Gaddafi.  However, to allow the former colonial countries to attack any portion of Africa without a response from us, was betrayal.  To be fair to the African leaders, one could say that we were taken by surprise. Even me, I did not believe that Western leaders could be so reckless as to do what they did in Libya.”

In an article titled, “Casualties of Western ‘Neo-Imperialism’ and African Weakness” Museveni spoke his mind on global politics and security.

“Allah elected me, and only Allah can remove me. I am the president of all Gambians. Let’s be clear, I will not let the one per cent (of violent people) question the peace, tranquility and development of this country, I will never accept it.”

Jammeh said this in November ahead of the December 1 elections. He has since refused to accept defeat.

Grace Mugabe was speaking to the women’s wing of the ruling Zanu-PF party about claims that she wanted to become president.

Shekau’ announces one of his many ‘ends’

“For me, the end has come. May Allah protect us from evil… I thank my creator.”

In March, Abubakar Shekau said this in a video where he purportedly announced his end

“Africa does not need your sympathy or Overseas Development Assistance. Africa needs a fair chance to trade with the rest of the world and amongst ourselves.”

“When we leave here, you see any beautiful piece of land, you like it, occupy it – it belongs to you. It is your land.”

Leader of the EFF told his supporters outside the Bloemfontein Magistrates Court, where he was on trial on charges of contravening the Riotous Assemblies Act.