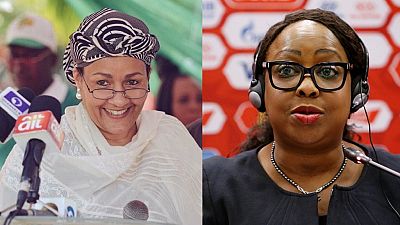 As part of our review of year 2016, we celebrate two African women who made international headlines for the right reasons.

The two in question got key international appointments, roles that position them close to the top men in two of the world’s most powerful institutions. The United Nations (UN) and the International Federation of Association Football (FIFA).

Fatma is a woman with international experience and vision who has worked on some of the most challenging issues of our time. She has a proven ability to build and lead teams, and improve the way organisations perform.

a. When were they appointed?

Samoura’s appointment in May as top level executive of FIFA was a historic feat as she was the first woman to rise to that height in global football management. Her appointment was subject to an interview which she scaled before officially starting work in June.

Amina Mohammed’s appointment was the more recent one but she was not the first African woman in the role. She became only the second African woman to be appointed to the role of Deputy Secretary-General of the UN. The first being Tanzania’s Asha-Rose Migiro who served in the role between 2007 – 2012 under Ban Ki-moon.

b. Before their appointments, what roles were they playing?

Fatma was with the United Nations Development Program (UNDP) she has over two decades been working for the UNDP. At the time of her appointment, she was the UN’s Resident/Humanitarian Coordinator and UNDP Resident Representative in Nigeria.

On her part, Amina – the Nigeria and UK trained development expert, was Nigeria’s environment minister. She was appointed by President Buhari in 2015 and was largely seen as one of his most vibrant and best performing appointees.

c. What are their exact roles?

The Secretary General of FIFA is seen in some quarters as an even more powerful position than that of the president. Samoura and her team are essentially tasked with running the day-to-day activities of world football but more importantly coordinating wide range reforms promised by her boss during his campaign to replace embattled Joseph Sepp Blatter.

As Deputy Secretary-General of the UN, Amina is likely to play a more backstage role at the global political bloc located in New York. Her appointment according to the incoming Secretary-General was in line with restructuring the organization to reflect gender parity.

Deputy SGs are hardly seen as compared to the substantive SGs but the new regime could play up a more outward role for Amina who would certainly be key in the UN’s development agenda going forward.

d. Who did they replace, who are their bosses?

At FIFA, Samoura serves as the right-hand woman for Gianni Infantino who replaced Sepp Blatter, long serving FIFA president who was axed following a string of corruption related offenses. She replaced Blatter’s powerful right hand man, Jerome Valcke, who was axed along with his boss.

In the post of Deputy UN SG, Amina Mohammed replaces Ban Ki-moon’s deputy, Swedish Jan Eliasson, who bows out along with Ki-moon. She works directly with the world’s topmost diplomat, Antonio Guterrez, as they work to achieve global development goals and to help tackle climate change.

e. What their respective bosses said about them

“Fatma is a woman with international experience and vision who has worked on some of the most challenging issues of our time. She has a proven ability to build and lead teams, and improve the way organisations perform. Importantly for FIFA, she also understands that transparency and accountability are at the heart of any well-run and responsible organisation,” – Gianni Infantino.

“I am pleased to announce that I will be appointing Ms. Amina J. Mohammed of Nigeria as my Deputy Secretary-General, and Ms. Maria Luiza Ribeiro Viotti of Brazil as my Chef De Cabinet, I am happy to count on the efforts of these three highly competent women, whom I have chosen for their strong backgrounds in global affairs, development, diplomacy, human rights and humanitarian action,” – Antonio Guterrez.